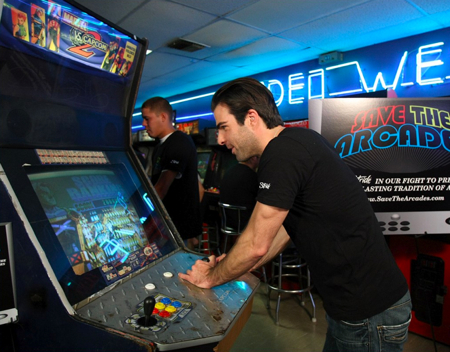 Zachary Quinto stopped by the Video West arcade in Glendale, CA, last week to get his game on and help promote Stride Gum's mission to help Save the Arcades. To help choose which local arcade will get a $25,000 boost from Stride, old-school gaming fans can play the online Flash game Zapataur -- then choose which arcade gets their earned in-game points. The arcade with the most points in the end gets the cash.

As most gamers know, the arcades of the 70s and early 80s met their demise (mostly) with the increased popularity and affordability of home consoles. The Wikipedia entry on arcade history explains how arcades began to develop a reputation for being "seedy, unsafe places" while home gaming technology like the Nintendo NES, Sega Genesis, and eventually the PlayStation advanced to become equal to and eventually better and cheaper than arcade gaming -- not to mention longer playing times.

But one of the coolest aspects the arcade offered is missing from living-room gaming: the social environment. At the arcade you could hang out with friends, compete with other kids you'd just met, watch the older guys kill at pinball, and learn the best tricks and shortcuts (as well as which machines would malfunction and give you an extra ball). The newer family-friendly entertainment centers made famous by food-service places like Chuck E. Cheese and Gatti's Pizza are descendants of the arcades of yore. But I would argue that despite its evolution, the classic arcade -- the one you went to without your parents -- lives on in a few important ways, including popular culture and nostalgic re-creations.

1. Emulators. You can check out the XBox Live Arcade or the upcoming Wii Virtual Console Service to play all the cool games from back in the day like Asteroids, Tron, Pac-Man, Space Invaders, and Missile Command. While emulators were likely made popular by the age group nostalgic for the older games (people currently aged around 25-40), old-school games and all things eighties really are hot and "new" to teenagers right now.

2. Mega Entertainment Centers. Okay, so they include restaurants, mini-golf, bowling, and laser tag, but the arcade sections are essentially technologically advanced versions of the classics. They still include some pinball machines and classic fighting games like Tekken and Streetfighter, as well as FPSs like the very cool Aliens game I played at our local place on the Fourth of July. And the social aspect seems to be back in a new way with games like Dance Dance Revolution. 3. Pop Culture. Shows like Chuck celebrate the video game coolness and nostalgia of the 30-something crowd, bringing back button-smashing and joysticks, Tron and Sand Worms, Rush and, well, Jeffster.

4. Die-hard fan re-creations. In particular, check out Peter Hirschberg's vintage 80s-style Luna City Arcade (you won't believe how incredible it is) he built at his home in Linden, Virginia. It's so impressive it caught the attention of The Washington Post as well as a bunch of major bloggers like Wil Wheaton, Digg, Engadget, and Gizmodo. Finally, the most fascinating thing I came across on the web while researching the topic is the history of arcades and arcade games. I had naively assumed that arcades were a product of the 70s. But it was 1920s-era Midways at amusement parks like Coney Island with ball-tossing games, shooting galleries (remember Big and Back to the Future III?), and the earliest coin-operated machines that would play music or tell fortunes. The first coin-operated pinball machines of the 1930s were made of wood and scored mechanically rather than electronically. The driving game pictured below is a 1960s-era Drivemobile by Sega. (Who knew this was a predecessor to the Genesis?)

When Atari was formed in 1972 and created the massively popular video game Pong (based on an earlier popular Ping Pong game), the modern video gaming era pretty much began. (See the cultural reference to Pong in Pixar's WALL-E, which suggests that even after the earth's garbage apocalypse, Pong will still be around and be cool.)

For more on vintage arcade games pre-1970s, I recommend this site by a game collector who details the history and includes pictures of old mechanical gun games, mechanical driving games, fortune tellers, diggers and cranes, coin-operated moving picture shows, and punching bags. As it turns out, even before vintage, there was vintage.

3 Responses to "Save The Games"