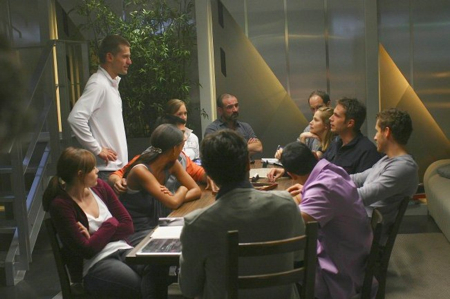 Virtuality: The Next Best Show You May Not See

If you happened to miss Virtuality's premiere on FOX, it wouldn't surprise me. If not for the GWC hivemind, I would have. In my opinion, it wasn't promoted very well. Far be it for me to question the marketing decisions of a highly successful network -- but they dropped the ball.

Created by Ronald D. Moore and Michael Taylor, Virtuality is set aboard the Phaeton on a ten-year journey to explore the nearby star system Epsilon Eridani. A corporation known as the Consortium partially funds the project via a Reality TV show called Edge of Never: Life on the Phaeton which chronicles the experiences of the 12-person crew. Months after leaving Earth they are informed that their planet will become inhospitable within the next 100 years, thus changing the priorities of the mission from exploration to the survival of the human race.

The Phaeton is equipped to sustain the crew on its trek across the stars with living quarters, virtual reality headsets, and a botany... ahem... bay where their food is grown. The virtual reality modules play an integral part in the drama. There is a literal ghost in the machine that wreaks havoc on the crew's experiences in the virtual world.

FOX broadcast Virtuality as a TV movie, yet it was intended to be a full-blown series. As a result, a web campaign has been launched to bring it back as a series. You can visit http://virtuality-tv.info/Renewal/ and show your support.

Hopefully, the potential for this show won't be cut short. Like most great science fiction, Virtuality could be used as an allegory for our present society. The major themes for this show are the nature of reality and self-deception. Virtuality could make commentaries on two of society's recent obsessions: social networking and Reality TV. How do these affect our lives? What is reality? Is it a matter of perspective? For me, the most intriguing moment of the show happened when the commander named Frank Pike replayed his experience in virtual reality. In the opening sequence Frank is playing an American Civil War scenario. His troop is ambushed. Frank stops the simulation and is met by the anomaly that shoots and kills Pike. In his quarters later, Frank plays the simulation at a slower rate to capture what happened at his time of death. It reminded me of a scene from a 1983 film called Brainstorm. Frank watches as his "soul" follows a bright light, travels down the corridors of the Phaeton and floats into space. This has a profound effect on Pike. It also opens up questions to the audience. Is death the end? Can you upload/download a soul?

If Virtuality does not get picked up as a series, I hope that some of these interesting concepts make their way into the upcoming series Caprica. Only time will tell.

7 Responses to "Virtuality: The Next Best Show You May Not See"