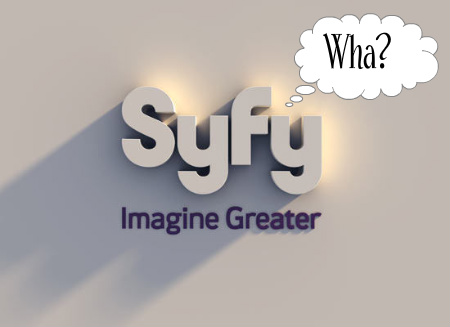 I Mostly Understand the Reason for Renaming Syfy

Renaming the SCI FI channel to Syfy is proof positive that the management of the network are a bunch of booger-picking morons who wouldn’t know a phaser from a frisbee.

…at least, that is what I thought until about five minutes ago.

As I wrapped up my lunch break I stumbled across the infamous March 2009 announcement on SCI FI that they were changing their name to Syfy which stated,

Besides our community which appreciated the, "water-cooler" shout out, more than 1,000 comments were immediately posted on their site ranging from, “STUPID!!!!!”, “Is it April Fool’s Day already?”, to “DUMB! DUMB! DUMB!” Websites and blogs across the internet began attributing Syfy President Dave Howe as saying, “The name SCI FI has been associated with geeks and dysfunctional, antisocial boys in their basements with video games and stuff like that, as opposed to the general public and the female audience in particular."

Like all my fellow geeks I wrote Syfy off as a marketing fiasco, full of sound and fury signifying nothing. Surprisingly, I was correct, from a certain point of view.

Linked to the original announcement is a response from Mr. Howe who presents a direct and honest line-by-line response to the questions surrounding the name change. You should definitely read the whole article, but here are some key points that are important to understand. Please note all quoted items come from the Mr. Howe response:

So there you have it. Do I now adore the name Syfy? Not really. Do I understand their rationale behind the change? Much more so now. In the long run I am starting to believe they made the right decision? Yes, yes I do. I respect their desire to broaden the perception of their scope from, “Aliens, Space and the Future” to sci-fi, fantasy, paranormal and beyond.

Thank you Syfy. I’m mostly onboard now. Mostly. (Mr. Howe, I keed! I keed! this is an Aliens shout-out).

11 Responses to "I Mostly Understand the Reason for Renaming Syfy"