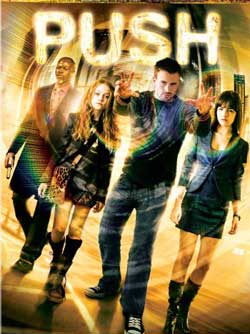 Push didn't promote itself well. Released almost a year to the day after the similarly-themed and poorly-received Jumper and featuring a synopsis that sounds like a repeat episode of Heroes -- or worse, X-Men Lite -- the movie doesn’t first present itself as something you have to see. So most people didn’t, including me. Fortunately, I just caught some friends watching it, and now that I’ve checked it out, I'll happily do the heavy lifting for the movie's marketers and explain why it's worth watching.

Don’t read this as a review, but as a recommendation. I’m trumpeting the element of Push that makes it good sci-fi, not rehashing its strengths or weakness as a film. Any discerning sci-fi filmgoer can figure those out on his or her own. On to my point.

The story of Push follows a misfit bunch of people born with various types of psychic superpowers. They're evading agents from a government agency called the Division, which wants to do to them what government agencies tend to want to do with people with superpowers. Not much new here, right? But Push works because of the consistent rules by which its universe is run. If you’re frustrated with super-people stories that seem to let their heroes get away with anything, Push is a smartly-drawn antidote. The rules of the story allow its supers to have cool powers, of course, but they also define their limitations and set up the challenges and dangers they have to face.

The lead hero, Nick, is a Mover -- he has the power of telekinesis. But he’s bad at it. He can’t even get a pair of dice to roll in his favor, or keep himself from getting beat up by the thug who wants his money for said dice roll. The movie never plays it cute by suddenly having Nick make a leap of power at a crucial moment or glossing over his learning curve in a training montage. He doesn’t even have a helpful Yoda-type to teach him what to do. Nick goes through a bumpy process of learning what his powers can do mostly by getting the crap kicked out of him by his much more powerful Mover nemesis and trying to copy what he does.

Anytime the villains and heroes face off in this movie, their powers work just as they’re supposed to. The plot doesn’t cheat on that account. It never left me asking, “Why didn’t they just do this?” Despite the twists of plot, the story keeps the powers simple and stays consistent with its own rules. Don’t think they’re D&D or RPG-type rules, either. Charts of powers and character stats work for games, but those can be tedious when applied to a movie whose story must be driven by emotion and character. Our heroes’ solution to evading their clairvoyant adversary is not to wait until the Watcher stops to recharge her mana, rather… well, I won’t give it away. But how would you outwit an enemy who can foresee every choice you’re going to make? The trick the heroes devise drives the action of the last act of the movie, and made me smile in satisfaction. Afterwards, I was still thinking about it. If I were dropped into this adventure, what would I be: a clairvoyant Watcher, a mind-controlling Pusher, an illusion-casting Shifter, or maybe a psychic-blocking Shadow? And how would that make life more or less difficult for me? Well-constructed stories do that for us -- they build a world we can imagine ourselves playing in, even after the story they’ve told us is over. And that’s good sci-fi.