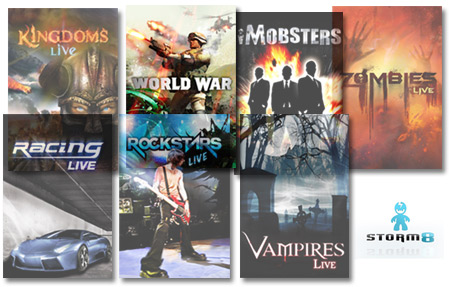 When I first made the jump to an iPhone I was very worried about becoming one of the pod people who can’t put them down. As it turns out, that’s a total non-issue -- however, I did find a bunch of sweet, downloadable, free games from producer Storm8 that are wickedness personified.

There are seven games in the Storm8 arsenal: Kingdoms, Vampires, World War, Racing, iMobster, Rockstar and Zombies. Each has its own unique setup and bend to the overall game play but if you learn how to play one, the others will quickly follow.

For anyone who remembers them, think of these games like a super-updated, live version of the old-school bulletin board games of basic user nets back in the day. For anyone attuned to the more recent apps it's very much like Facebook's Pirates or Commandos game. You can upgrade your team, monster, mob, band, etc. with different strategies and then use that new gear to go slaughter your fellow players.

Game play is stupid-simple. It’s all a button-and-picture based interface that is simple to navigate and deceptively powerful. To gain new players you need only give out your code to another player and have them accept it. For instance, say I’m short of allies in World War. To recruit more players I leave a comment on my chosen potential ally’s comment area that says. “Wanna ally up? My code: kxtt6b”

The code is my personal ID in the game that, if input into their recruiting slot, will send me an accept or reject notice. If I accept, we become allies and he and I get another warrior for the fight. Then we both get to band together and hit people who annoy us if the alliance broadcasts what amounts to a gank order.

It may seem too simple and lack all manner of modern motion graphics altogether (and it kinda does) but that’s really the point. It’s a quick thing you can do anywhere whenever you feel like it, entertaining yourself for quite some time by planning and building yourself up.

Storm8 has created a fantastic application for the iPhone that brings old bulletin board games into the 21st century and lets me slay zombies, attack other countries, participate in illegal street races, clip a mobster, rock a karaoke bar and battle an Orc while sitting in the doctor's office waiting room. That works for me. Hell, anything's better than 8-month-old Redbooks.

One Response to "7 Guilty Pleasures From Storm8"