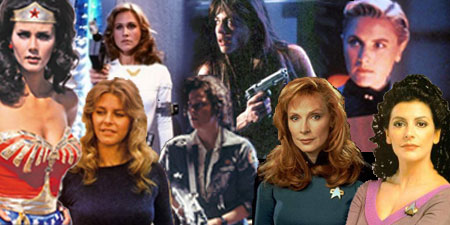 A Salute To Women In Sci-Fi

Many of us here at GWC are women. I would also say many of us like sci-fi not only because it’s cool as hell, but because many times growing up, sci-fi was the only place we saw strong, capable women we could look up to. It’s not always easy being a fan of a genre that the greater world sees as dominated not only by males, but by teen-aged males. Let me assure you, we women are here and we love every minute of it.

My journey as a female fan started most likely in 1977, when a little film came out. Perhaps you’ve heard of Star Wars? Princess Leia was a revelation. She was a leader in her own right. She also did not play the damsel in distress role as we had typically seen it before. She helped the guys as much as they helped her. She could shoot guns! She stood up to the villain without cowering in fear. Next is Jaime Sommers in The Bionic Woman. I didn’t think about her being a cyborg at the time. I just knew she kicked butt and took names. She was a spy helping to protect the country. She ran like the wind, crushed things without thinking about it and could hear a whisper from down the street! Who didn’t run around as a kid making the bionic's noises?

Next, Diana Prince in Wonder Woman. Do I really need to say more? She wasn’t the one calling for the rescue in a bad situation. She WAS the rescue. As a little girl I ran around constantly twirling around, turning into Wonder Woman. I had my rope of truth and deflected bullets with my bracelets every day. I can’t tell you how badly I wanted an invisible plane. (Who wouldn’t?)

Buck Rogers had Wilma Deering. She was yet another completely capable woman. Not only was she in the command structure, she was a pilot. She went out every week in her ship, shooting down bad guys. She got a cool laser gun and she was always in charge of the mission. When Star Trek: The Next Generation came out I was hooked. Tasha Yar, a woman, was Chief of Security! Dr. Beverly Crusher, the ship's chief medical officer, was a woman. Counselor Deanna Troi was not only on the bridge, but part of the command crew. Although Tasha wasn't on the show after the first season, all three women were not afraid to voice their opinions, even to the gruff Lt. Worf. Captain Picard felt their input was valuable and applied their observations to his final decisions. Counselor Troi and Dr. Crusher even bossed Picard around at times, and he listened.

Then I saw Alien. That movie scared the bejeezus out of me, but it starred Ellen Ripley. She was and is simply amazing. When I saw Aliens, I not only admired Ripley; I worshiped her. She wasn’t a hero out of the box. She was just a woman doing a job. Then the Alien showed up. Ripley knew the regs: she was scared out of her mind, but she held it together to survive. She didn’t fall apart and let someone else take over like we often see in female (even strong female) characters. She rescued herself.

I saw Terminator 2 long before I saw the original Terminator. Sarah Connor in T2 was intense, sure of herself and knew what she had to do. She didn't feel the need to be "nice,” a quality often expected in women. She not only got to shoot guns, she got to shoot big guns. She went out and protected her family the best way she knew how. For me as a 21-year-old it was inspiring to see. You can see the beginnings of these women with characters like Star Trek’s Uhura and The Avengers’ Emma Peel. And we continue to see the tradition all of these women brought us. You can see it in characters like Babylon 5’s Commander Ivanova and Buffy the Vampire Slayer to Stargate SG1's Samantha Carter and Battlestar Galactica’s Starbuck. We here at GWC salute all of these women and the writers who gave them to us. May they continue to inspire young girls -- and boys -- for many years to come.

8 Responses to "A Salute To Women In Sci-Fi"