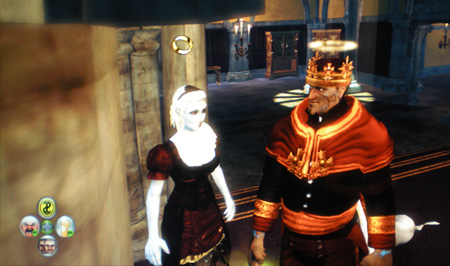 I thought I could resist -- I really tried, honestly, but Fable II was calling me. Even after the engrossing social aspects of Eve, I still felt the need to download the new “See the Future” expansion pack for Fable II. It’s a sickness really, a wonderfully crafted sickness.

If you’ve played the game at all, even for a few minutes, you’ve met Murgo the trader. He’s the guy who sold you the music box at the very beginning of the game. Well now Murgo is back and hanging around the Bowerstone town square with his stock of cursed magic items that just happen to take you to other worlds. Each world has a few problems that need someone like you to help fix them. Commence with the fun!

I’ve spent the last few days playing with the new content and still haven’t bested them all so the $5 investment in the expansion really does seem to be worth it -- at least to me. There are several things of note thrown in the mix this time which includes a few new items for your faithful four-legged companion. After I saw the first one that turns him into a Husky I had to have them all.

For the more adventuresome types there’s also a coliseum area in See the Future that is much like the Crucible, only cooler. I’m still picking my way through that one actually, so I won’t try and spoil it for anyone else. Add to that the new outfits Lionhead managed to stuff into the new expansion (of which there are no less than FIVE I have discovered thus far) and you get a very well-rounded bunch of playable fun. My new character “King” for instance, in fact, now looks like one.

And before anyone asks… I did indeed marry Lady Grey. I mean come on, she’s a hot Goth chick with a mean streak -- what’s not to love?

Getting back to business: if you enjoyed Fable II the new content is worth your time so don’t be frightened of the expansion pack blues where you spend mega cash and get about 10 minutes worth of actual play. That’s normally not the case with Lionhead.