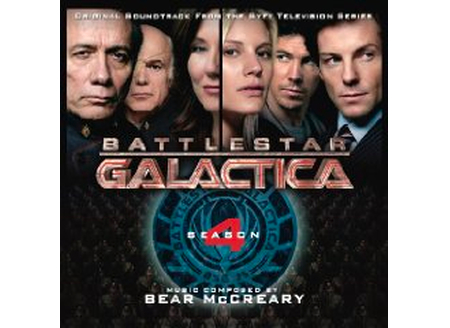 Many GWCers will likely agree that one of the greatest qualities of Battlestar Galactica has been its storytelling -- its ability to reach toward its viewers and connect with them on an emotional and intellectual level. A perfect example is the gut-check we all felt at the end of Season 4.0 when the fleet arrived at Erf, the so-called promised land, only to find it a charred nuclear wasteland. But despite the excellent storytelling, this would all be somewhat lacking in emotion without the soundtrack to back it up. Fortunately, Bear McCreary was at the musical helm once again to make the show's finale soundtrack the most powerful yet.

Compared to the soundtracks for the first three seasons and the miniseries, this is the first seasonal soundtrack to be distributed as a two-disc set, with the entire second disc devoted to the music of the series finale, Daybreak. The first disc opens with Alessandro Juliani's impressive vocals in Gaeta's Lament, sung when Gaeta was recovering from his leg amputation. Other notable tracks on the first disc include Resurrection Hub, heard during the battle to destroy the Hub; Farewell Apollo, from Lee's departure from Galactica to be a full-time member of the Quorum; and Diaspora Oratorio, the monumental orchestral piece heard upon the fleet's dramatic arrival at Erf.

The second disc is just as intense, taking the listener right back to the intensity of the three-hour finale of Daybreak. One of the most pivotal tracks in this half of the soundtrack is Assault on the Colony, its place in the episode self-explanatory; Kara's Coordinates, from Galactica's thrilling escape to the mysterious coordinates rendered from "the song"; and The Heart of the Sun, providing us with the pivotal tribute to the original series as Galactica and the fleet sail off into the sun[set].

Using unique musical styles drawn from across the globe, Bear McCreary once again illustrates the beauty of diverse cultures from the Battlestar Galactica universe and parallels it with our own, reminding us why this show resonates with so many people across the world.