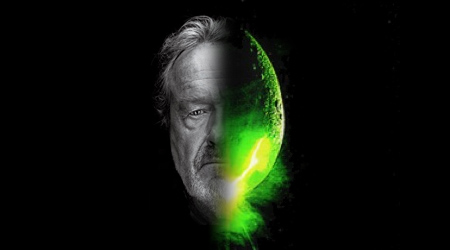 It turns out Purefold isn't the only sci-fi project coming down the pipe for famed director/producer Ridley Scott. Late last night, Variety confirmed that the original Alien helmer will direct the upcoming Alien prequel. If we didn't know better, we'd think this had been timed to perfectly coincide with our crüe's Alien arc!

This surprise announcement comes just months after the rumored conflict between 20th Century Fox and Scott's production company, Scott Free, over who would direct. Scott had been heavily campaigning for that right to go RSA director Carl Rinsch, but Fox staunchly supported the prequel only if Scott himself was behind the camera. As unlikely as that seemed as recently as yesterday, the revelation of Scott returning to the franchise that launched his mainstream career is earthshaking (as far as film is concerned).

The as-yet-untitled Alien prequel film will mark Ridley Scott's long-awaited return to the realm of science fiction. He burst onto the scene in 1979 with the franchise's initial horror installment, Alien. Over the next six years, he released the seminal sci-fi and fantasy films Blade Runner and Legend, respectively. Since then, his prolific career hasn't returned to the genre.

What are GWCers' takes? Does Ridley Scott still have enough sci-fi mojo to raise the Alien franchise from the dead? Can his prequel rival the caliber of his original Alien?  Will we see an appearance by Winona Ryder as a 21st-century billionaire with a penchant for shoplifting that will eventually be the physical model for future replicants? Let us know what you think!