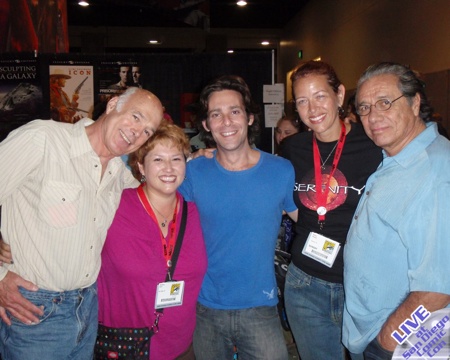 Sunday. Kid's Day. The last day of the con -- and also the best day to get those deals! Vendors don't want to pack all that craaap back up again!

The kids get pretty neat freebies, but for little hands it's sometimes hard to tell what is free and what isn't! While dealers scramble to protect their pricier wares, they're more likely to throw a little extra in the bag. The newspaper said the Con thrived despite the economy, though the hub noticed that the Spike & Mike booth kept their prices pretty low and level instead of the usual high start with daily price cut. Read on for lots more pix -- and an explanation of how the above photo came about.

As you can see, I have my little family trained quite well for a casual day of swag shopping and booth gawking. Then we headed back to the floor to score -- and take last looks at -- cool toys. TREK! um, sorry, is my Tartiness showing? But that's not all! Lady D paid to have her pic taken with the Battlestar Boys and invited me along! Would YOU say no? EJO told her, "This is a great thing you're doing. We don't know when we'll be together like this again." I think you can see some of the sadness in his eyes. He said something similar when he hosted the Bear McCreary concert. For these guys, this is all reunion. Thrilling and sad at the same time. So Say We All.

[Ed. Note: If you get a chance, be sure to thank bkitty in the forums for all her hard work hosting an awesome GWC meetup at the event and bringing SDCC a little closer to those of us who couldn't attend. Thanks, bkitty!]