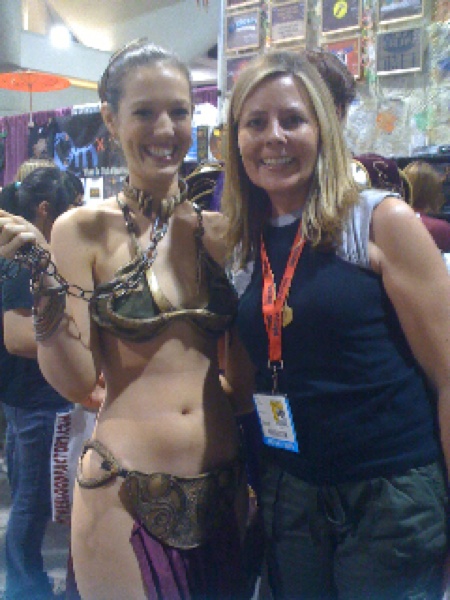 24 Hours At SDCC: Making The Most Of It

How much living can you cram into 24 hours at Comic-Con? Is it worth all the travel, effort, and cash to be there for such a short time frame? I'd say, yes, yes, and YES!

My 24 hours began at 6:00 p.m. on Thursday, July 23rd when I arrived back at our oceanside condo and found a DM on Twitter from Lady D: "Listen to your voicemail!" she said. It seems they had an extra VIP ticket to that evening's Bear McCreary concert. "Was I interested?" Needless to say, I said a quick goodbye to the family and jumped in the car.

Read on past the jump for the rest of my SDCC experiences, including my first Slave Leia (above).

Edward James Olmos hosted the show. Before he introduced Bear, he led us in three rounds of "so say we all!" The energy and power of that moment reminded me of when I was at the 2002 Winter Olympics and saw the US women play ice hockey. The crowd kept chanting, "USA, USA, USA!" You're in a large crowd, but you feel so united in purpose and spirit that it's such an amazing feeling. When Eddie said those words, for a moment I felt transported to the hanger deck on Galactica.

Even though I'm a writer, I can't even begin to find language evocative enough to describe Bear's music effectively. I've never experienced music that powerful before. I'd suggest buying every CD he has if you haven't already. As a writer, I really enjoy seeing other artists in the midst of their creative process, and these musicians didn't disappoint. I couldn't keep my eyes off of them. Our VIP seats gave a great view of the stage. I've never been this close to the musicians before and watching them was, for me, even better than listening.

Over a dozen musicians joined Bear on stage. The strings section was especially fascinating; there were moments when they played with such an urgency that it bordered on violent. I felt certain that the instruments would shatter in their hands. Then they'd switch gears and display delicacy that made me think that the fiddle, violin, or cello was as light as a feather as their hands gently moved back and forth.

Bear, as both as musician and conductor, left me speechless. At times he would be ever watchful of his musicians, with an eye on each one before he allowed himself to become lost in the music as well. I was so impressed with how he managed it all, and I tried to relate it to my own experience as a writer. There are times when I have to orchestrate a complicated scene in which half a dozen characters are present, all with dialogue. My job as a writer is to make sure my readers know who is speaking without straining to hear each voice. This is what Bear did, and I watched him move with the grace of a ballet dancer as he led his orchestra and the audience through the music. One highlight: Katee Sackhoff sat next to Bear at the piano to play you know what.

Since we were in the VIP section, there were several industry folks about including Richard Hatch, Michael Hogan and the actress who played Kat. The dirty truth about industry folk at a music concert? They talk through the whole thing. Lady D gave a few deep, teacher-like "shhhhhs," but they never listened. After the concert our group -- Lady D, bkitty, The Hub and me -- walked past Michael Hogan and introduced ourselves. We got a great group shot with him too. My Con experience could have ended right there, and I would have been satisfied. Luckily it didn't.

After about five hours of sleep, I gathered up my children and we headed out for our day of fun. ConnerAZ (my 16 year old) had friends to meet from AZ. He really couldn't ditch us soon enough. BrettAZ (my 13 year old) and I made great friends in line for Ballroom 20, where the BSG/Caprica and Whedon panels would be held. People are so eager to meet, talk and share information. A lovely Kiwi gal showed us exactly where the Browncoat booth was on our map of the exhibit hall. I doubt we would have found it otherwise, given our small amount of time and the scope of the hall itself.

BrettAZ went off to explore while bkitty, Lady D, Default Profit and I sat together for the next eight hours. bkitty has the best photos of the panels. Lesson learned: the iPhone camera isn't great at distance shots. Next time I won't give the camera to ConnerAZ. It was thrilling to see Ron D. Moore, and yes, he was having a good hair day. I must say, he got a sour look on his face when Virtuality was briefly referenced in a question. Could it be that the obscure Friday night broadcast didn't get the ratings the network wanted?

The best part of that panel was watching Esai Morales and Eddie talk about playing father and son in Caprica and BSG. I thought nearly all of the audience Q&A throughout the day were insightful and sometimes provocative. Issues about gender and race were addressed for on-screen roles as well as those behind the camera. One fan asked a producer -- sorry, I can't remember which panel -- "Where are the women on your creative team?" to which the producer replied, "Would you ask The Rolling Stones why there aren't any girls in the band?" Interesting indeed.

The 24 panel was one of my favorites. I love the show. Katee Sackhoff is joining next year's cast. She's hysterical to watch on a panel -- a complete giggly girl rather than the BA Starbuck we all know. The best line I heard all day came from Keifer Sutherland. We watched a trailer clip for Day 8, which was fairly tame in terms of what we're used to seeing on 24. After the clip ended, Keifer, said, "Don't worry, we still blow shit up."

I can't say enough about the Dollhouse panel. BrettAZ was giddy listening to Joss. We watched the fabled, unaired 13th episode, which I found confusing and disjointed. The themes it contained will be better explored in season two. Eliza Dushku was very appreciative of fan support and admitted that she heard and agreed with fans that it took half a dozen episodes for the show to find its groove. It's nice to know they listen to us.

After all the panels, I spent some brief time downstairs in the exhibit hall. I found a lovely Slave Leia too -- my first. She was real and she was spectacular. I didn't get to see much downstairs, sadly. I found the Lucasfilm booth and bought Star Wars scrap book supplies, which made me very happy. But if you have only one day, and you commit to panels, you sacrifice shopping time.

I saw lots of Viper costumes like mine, but honestly I felt a bit naked without my Starbuck tattoo and my partner-in-crime, Beef.

So what was the best part of being there? Was it seeing nearly half the cast of BSG? Swag? The Browncoat booth? Busty women in small costumes? Handsome men with large light sabers? Can I even pick?

Yep. The best part for me was sharing my GWC family with my AZ family. Here at home I am the lone geek, though BrettAZ is growing more active each day. My Hub and kids poke fun of my banter about the Star Wars EU, my constant "And one time, on Watercooler..." quotes, and my BSG dog tags. In 24 hours they were able to personally experience why I'm so crazy for all this stuff. They got to meet MY friends. And what did they learn? What I've known all along: we're fun, we're cool and we know how to have a good time together.