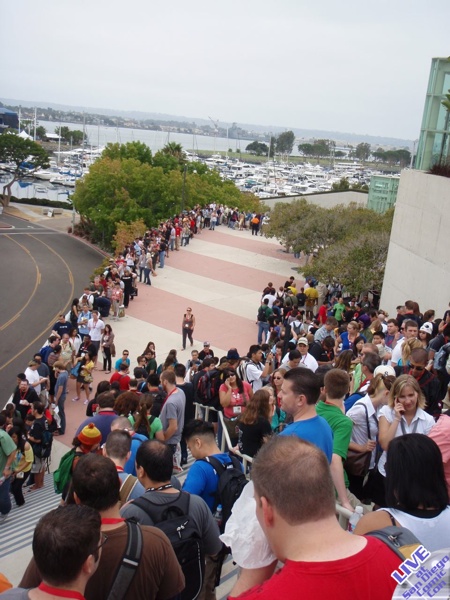 Live From SDCC: Saturday, Part I

If I had to quantify Saturday at SDCC. I'd say it's a good day to walk the floor as most people are in the myriad of panels held that day. For example, the photo above show what it looked like to line up for Ballroom 20 at about 9:30 a.m. Needless to say we missed the Chuck panel, which was the first one of the day. Read on for more Saturday SDCC pix!

After walking the floor a bit, we camped out in line for Hall H. This entire queue is formed outside on the southern lawn. Not for SDCC n00bs: wear your sunscreen! The hub depended on the kindness of a stranger for the brolly! Saturday was day four of con fatigue, and it was not so much hot as muggy -- ecch. When the line finally started moving us inside, I sighed, "aiiir conditioniiiing" and cheers went up all around! We made it for the Solomon Kane panel with James Purefoy. Looks very cool. Writer/director Michael Bassett cited Ladyhawke and Dragonslayer as some of his inspirations for his classic treatment of the film. Catch this one for sure!

Mike Judge, Jason Bateman, and Mila Kunis showed some hilarious clips of Extract, coming out in September. This is one of those surprise delight panels. The movie itself doesn't seem to fit the con, but I think the people behind it have some cred. You decide!

One more shot of eye candy One Response to "Live From SDCC: Saturday, Part I"