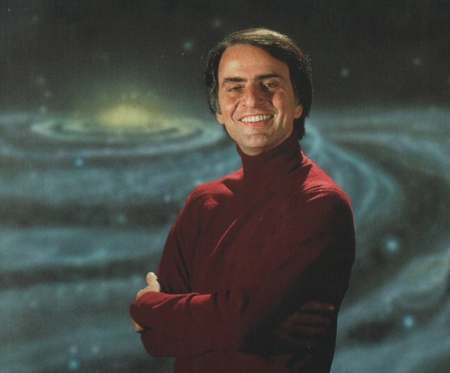 Who’s Our Next Science Hero?

A recent post on Slashdot asked: Where will we find the next "science hero?" The author implied that ever since Carl Sagan finished Cosmos, no one's stepped up to bring science to the public as effectively. Thankfully, I'm not sure that's true! But read on for my top four Carl Sagan replacement contenders -- plus seven honorable mention candidates, too.

Cosmos was a groundbreaking show for its time, and even now -- almost 30 years since it first aired -- the show stands the test of time. It's still a great teaching tool and an inspiration to viewers of all ages. But Cosmos originally aired in an environment consisting of only three major networks and PBS. Of those, PBS served as the primary source of science news and information. Carl Sagan also caught some serious criticism from his peers for trying to popularize science.

Since then, the stigma of being a science populist has diminished. The number of cable networks has grown, and we've added a few science channels to the mix. The rise of the internet also gives scientists an opportunity to reach people outside the classroom. Result: more scientists reach people today, but we don't see any one scientist drawing the name recognition of Carl Sagan.

But to answer Slashdot's question, here's my short list of front runners and honorable mentions for Carl Sagan replacements. (I hope, by the way, that all of these people will forgive me for any errors or omissions regarding their resumes.)

I selected these leaders based not only on their name recognition, but also based on how much effort they've put into teaching science to the general public through writing and the types of shows they host. Astrophysicist, writer, director of the Hayden Planetarium, Host of the PBS show NOVA Science Now and the PBS mini-series Origins, Neil came to the public’s attention after the Haden Planetarium moved Pluto from planet status to a "trans-neptunian object." His enthusiasm and cheerful manner earned him frequent guest spots on (and finally host of) several TV shows. Of all the people on this list, Neil deGrasse Tyson is probably the closest to matching what we think of when talking about a science popularizer. Engineer, comedian, and host of the Bill Nye The Science Guy TV show, Nye took a show that was focused for teens and made it accessible to adults, too. He's also known well enough that he can guest as himself on other shows. Along with their build team of Kari Byron, Grant Imahara, and Tory Belleci, these guys created a show that demonstrates the scientific process of testing and removing variables until you figure out what's going on. Even though the show usually ends with a big boom, it teaches the fun process of how science leads up to the boom.

Science historian and TV show host James Burke may not be well known in the U.S. But his short-run PBS TV shows Connections (1978) and The Day the Universe Changed (1985) proved just as groundbreaking as Cosmos. Where Cosmos covered the science itself, Burke's shows covered how scientists reached the discoveries with which they're credited. These shows influenced me as much as Cosmos, and IMHO they should sit on any GWCer's science DVD shelf.

Read on to page two for my honorable mentions.

9 Responses to "Who’s Our Next Science Hero?"