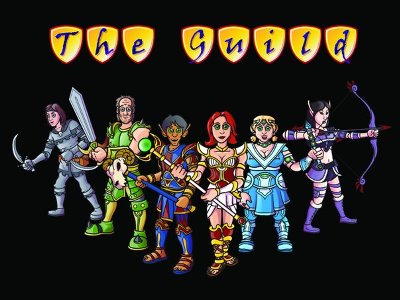 Dark Horse announced at the San Diego Comic Con that they're teaming up with the lovely Felicia Day to create a three part comic mini-series based on hit web-video franchise The Guild.  It seems Dark Horse's Scott Allie is a fan, too: “Felicia’s amazing, and her writing will translate smoothly into comics. This’ll make a great companion to our line of comics. It’ll fit great alongside our webcomics and our Whedon books. And I’m really looking forward to working with her to get into some areas the show simply can’t because of budgetary reasons," he said. Read on for more details.

“I’m really excited to work in a new medium and expand the Guild universe. The comics will be a great way for fans to become more involved with the characters, and see the characters interact in environments that we can’t afford to show in the web series. I can’t imagine working with a better company than Dark Horse. It seems like a perfect match for the show. Indie cred to the max!”

For those not yet indoctrinated, The Guild follows a group of six "guildies" as they decide to expand their online gaming experience and meet IRL. Ms. Day plays Syd, aka Codex, the guild's in-game healer. The story starts with Codex not only getting dumped by her therapist but ambushed by Zaboo (played by the awesome Sandeep Parikh), who shows up at her apartment and declares his undying love for her. As season one progresses, Codex tries to evict Zaboo from her apartment by engaging the help of her fellow guildies:  Bladezz (Vincent Caso), Vork (Jeff Lewis), Tinkerballa (Amy Okuda), and Clara (Robin Thorsen). Hilarity ensues for two seasons with season three releasing this fall.

If you haven't seen The Guild, do so immediately! Just hit the link below and start watching -- it's free. I did and now I'm hooked.

One Response to "Dark Horse Scores The Guild: Comics Ensue"