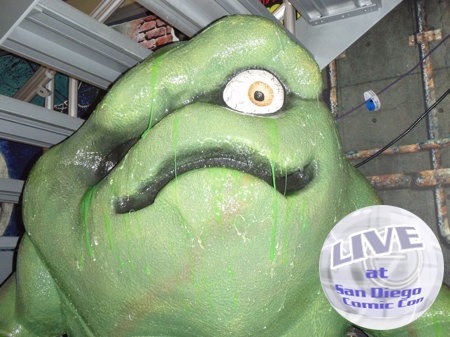 Frak! I just don't have any idea where to start with coverage of Thursday's awesome con experience, so we'll just jump in with the above: the goo monster. Read on for more Thursday photos!

Below was the view from the escalator down from badge registration into the 'con. The Robot Chicken panel was ossim. D and I ran into a few Larrys between the Sails area and Ballroom 20. (Note the command gold.)

Thursday evening we attended the Bear McCreary concert at House of Blues. Here's Michael Hogan holding himself together after so much beautiful music -- and we're not done! After Bear and company's BSG music awesomeness -- about four hours of it! -- Hogan took some time out to say "hi" to your GWC representatives. He remembered GWCers and the podcast interview, and he sends a warm "hello!" The concert VIP goody bag included CDs of Caprica, BSG Season 4, and Eureka, plus a little BSG DVD promo LED light and a SyFy tee! Katie Sackhoff joined Bear on stage to peck out the beginning of Watchtower from Someone To Watch Over Me. She giggled and messed up a lot -- totally adorable.