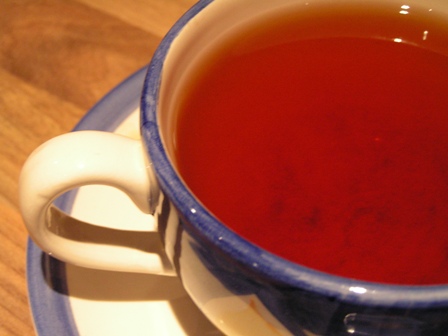 Food Straight Out Of The Future (Or Alternate Past)

Sadly, replicators aren't standard in Earth kitchens. And we don't live in the Star Wars universe where the only food we see onscreen is a pear flying through the air. Thankfully we're not forced to choke down algae mash with our algae coffee every morning. But if you've ever had a hankering for the food you see in your favorite sci-fi or fantasy series, chances are someone's come up with a recipe --  many of which aren't much harder to prepare than saying "Tea. Earl Grey. Hot."

I know many GWCers start every morning with a good cup of coffee. But if they lived on Pern, they'd have to settle for a good cup of klah. Luckily for us fans of Anne McCaffre's popular Dragonriders of Pern series, the supplemental book The Dragonlover's Guide to Pern shares several different Pernese recipes adapted for Earthling's use -- including klah and Piemur's favorite at a Gather, Bubbly Berry Pies. Fans of the series have created their own versions of klah, too, which usually involve some combination of coffee, chocolate, cinnamon, nutmeg, and sugar to taste.

Who hasn't wanted to try gagh? (OK, I'm betting a lot of people are wary of it.) This Klingon delicacy, as Kira Nerys and Ezri Dax make clear in Star Trek: Deep Space Nine, comes in many varieties. But GWCer lazysmurf's version is the most easily accessible here. Who knew that Klingons liked beets?

Unfortunately for those of us who want to figure out how large a piece of flarn is appropriate to leave at Valen's place at the table, the awesome recipe tome Dining on Babylon 5 is difficult to come by. Luckily, spoo recipes aren't. Try this one.

Onboard the Serenity, excellent moments of camaraderie and friendship are shared around meals. Food takes center stage in one of my personal favorite Firefly episodes, "Our Mrs. Reynolds," in which Saffron (aka Yo-Saff-Bridg) tries to seduce Mal through cookery. In a different episode, Zoe makes a dish that Wash aptly calls "wife soup." Here's a recipe.

More of a fantasy than sci-fi fan? Since Rowling set the Harry Potter universe in England, much of the food we see is plain old British fare -- besides the ubiquitous Bertie Bott's Every Flavor Beans. But a quick look turns up many recipes for sweets with which to please a witch or wizard's palate.

Do you have a favorite science fiction or fantasy adaptation recipe? What would you like to try?