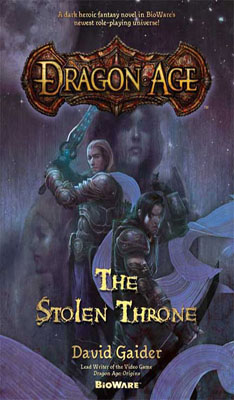 Stolen Throne feels like the original Star Wars trilogy meets the Harry Potter series, with the tales of King Arthur and the darker tone of George R. R. Martin's A Song of Ice and Fire series tossed in for effect. It's a coming-of-age story set against the backdrop of a rebellion to reclaim the throne for the kingdom of Ferelden's rightful heir.

The story centers around three main characters: the young Prince Maric (who must prove to himself and others that he is worthy of the throne), the outlaw commoner Loghain (Maric's reluctant best friend), and the noble warrior woman Rowan (who is betrothed to Maric). Each must make tough decisions and terrible sacrifices for the good of Ferelden while fighting to oust the viscious usurper sitting on the throne.

Maric, Loghain, and Rowan are each tragic in their own way, but Rowan's character arc is at times downright heartbreaking -- and steals the show. It's been a while since a character has moved me this much. You won't find a sunshine-and-rainbows happy ending here. You will find a gut wrenching this-is-how-it-needs-to-be ending that makes sense.

Even though it clocks in at over 400 pages, this is a quick and enjoyable read. Viewed as a video game tie-in, it's miles ahead of the competition (and an amazing prequel to Dragon Age: Origins). Viewed as the start of a new fantasy series, it's worthy of sharing shelf space with more well-known works in the genre. If you're looking for a good fantasy read -- or just want some background on the world of Dragon Age: Origins before the game hits the shelves this fall -- Stolen Throne is well worth your time.

[Note: Gaider is a frequent poster on the Bioware forum!]