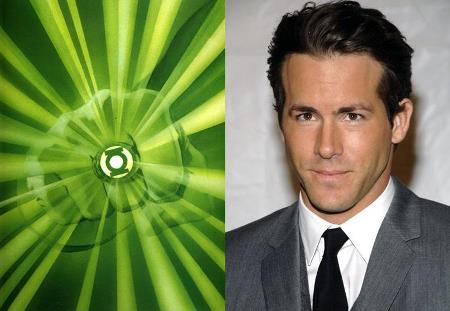 Ryan Reynolds Is The Green Lantern

Ryan Reynolds will portray Hal Jordan/Green Lantern in the new Warner Brothers movie to be directed by Martin Campbell and released in June, 2011, the studio announced. GWCers, of course, will remember Reynolds as Deadpool in this summer's X-Men Origins: Wolverine movie. Reynolds will join the likes of David Boreanaz (Buffy, Angel), Michael Rye (Spider-Man, Mission: Impossible, The Real Ghostbusters), and Christopher Meloni (Twelve Monkeys, Scrubs) -- all of whom have brought the Green Lantern to life either via acting or voice work.

The Green Lanterns each wear a ring that possesses magical powers that them to exert control over physical objects -- as long as the Lanterns retain the strength and willpower to control the ring. The more willpower a Lantern can summon, the better the ring will perform. The Lanterns recite an oath when they charge their ring. The most common Green Lantern oath is:

In brightest day, in blackest night,
No evil shall escape my sight
Let those who worship evil's might,
Beware my power... Green Lantern's light!

What do you think of Warner Brothers' decision to cast Ryan Reynolds as the Green Lantern?  Let us know in comments!

8 Responses to "Ryan Reynolds Is The Green Lantern"