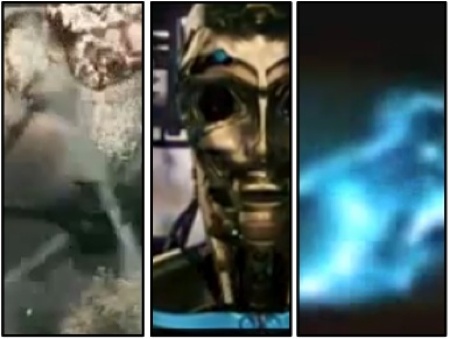 The Summer Of Avatars

I love that stuff. I especially like the fact that you can become someone else for a little while. Don't even get me started on Wii -- if they ever come out with a Star Wars fight Darth Vader type game, my head may explode. Hell, even with applications like WeeMe [warning: annoying sound ad on page], you can create a virtual you -- complete with how you feel that day -- and apply it to your IM account and GWC Forum profile.

RDM started the avatar franchise ball rolling with Caprica and Virtuality. Both touch on the concept of simulated living and the ramifications thereof. (BTW, if you haven't seen Caprica, stop reading, go to Netflix and hook that stuff up. I'll wait. No, seriously. Got it? Sweet, you'll dig it.)

But what if we could hook ourselves up and fight in simulations? Or take it further and live our lives without leaving the comfort of home? Well, two movies in September will attempt to show us how that might work out.

This looks so far past bad(sorrybarb) it's insane. In the game players have full control over a soldier, who'll shoot, fight -- and die -- on command. The soldier, however, is an actual human being. So let the ethical questions begin...

Later in September we get Surrogates. The concept looks really sweet: People live their lives through robot selves -- the ultimate avatar as it were. What could POSSIBLY go wrong?

Finally, to me the first and ultimate avatar movie was Tron. The Dude creates programs that live a life in a computer world and battle other programs. The sequel's still in flux it seems, but I found this clip from last year's comic con. If you haven't seen it, well, get ready. Just as a disclaimer, it's not crystal clear, but it's worth seeing. Ready?

Yeah, I was grinning like that when I saw it too.

I can't download data how to fly a Huey. But I'll get you the latest and greatest as always.