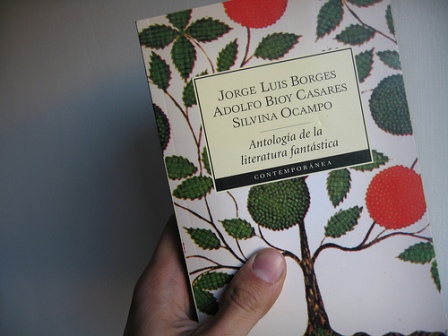 Beyond The Language Barrier In Fantastic Literature

In 1940 in Buenos Aires, Argentina, three writers -- Jorge Luis Borges, Silvina Ocampo, and Adolfo Bioy Casares -- published an anthology of fantastic fiction, Antología de la Literatura Fantástica, much of it what today would be considered literary fantasy, and much of it translated to Spanish from other languages, mainly English. When the same anthology was re-edited in 1965, however, many of the new stories were originally written in Spanish. Borges, Ocampo, and Bioy Casares were all also authors of fantastic literature, as fantasy is usually termed in the context of Spanish American fiction, and the growing number of fellow-Argentines and Latin Americans writing fantasy throughout the twentieth century produced a very thoughtful, interesting, and challenging corpus of speculative fiction that is perhaps not as well-known as it deserves to be. Though not comprehensive, these suggestions can point an interested reader towards some stand-out Spanish-language (in English translation) stories and novels.

Gustavo Adolfo Bécquer. This nineteenth century Spanish writer's collection of folk-tales, "Legends," is beautifully written in an ornate style somewhat out-of-use in our time. That said, these tales are bursting with suspense and the supernatural.

Adolfo Bioy Casares. Argentine like many of the writers on this list (for whatever reason, "la literatura fantástica" is much more of an obvious current in Argentine literature than in other national literatures of the Spanish speaking world), Bioy Casares is best known for his short novel, The Invention of Morel (1940). The book plays with the notions of repetition, reality, and mechanized reproductions.

Jorge Luis Borges. A literary master, Borges has been widely translated and read. His most popular works are his short stories, though he also wrote essays and poetry. His stories require a great deal of attention, but richly reward the reader who takes the time to put the puzzle together. My favorites are "The Circular Ruins" and "Tlön, Uqbar, Orbis Tertius."

Julio Cortázar. Another towering figure of Argentine literature, Cortázar is known for his short stories as well as a very experimental novel, Hopscotch. Some call him surrealist, but there are certainly fantastic elements in his work. If you enjoy film you might be familiar with aspects of it - Antonioni's Blow-Up (1966) is an adaptation of one of Cortázar's stories. I have yet to meet a Cortázar story that I didn't enjoy, particularly "Axolotl" and "The Southern Thruway."

Elena Garro. Garro's work dialogues with Mexican cultural conversations, but despite this specificity, her work can speak to a larger, global audience as well. Recollections of Things to Come (1963) is an excellent novel that weaves the fantastic into every-day life in a small town during the unrest of the Cristero War (1926-29). For a shorter taste of her writing, check out "It's the Fault of the Tlaxcaltecas."

Angelica Gorodischer. Gorodischer became well known in the English-speaking world due to her professional relationship with Ursula K. LeGuin, whose translation of Kalpa Imperial allows all the English-speakers of the world to enjoy Gorodischer's allegorical tale of politics and power in "The Vastest Empire that Never Existed." Gorodischer has also written several collections of science fiction stories, one of the most commented upon being "The Violet's Embryos," in which (male) astronauts are stranded on a planet where they can create anything they can imagine being.

Though necessarily limited (and focused upon a certain kind of fantastic literature - magical realism would require an entirely different post!), I hope that you take a moment to check some of these pieces out and report back.

(Thanks to Patricio00 for this great CC-licensed photo.)

9 Responses to "Beyond The Language Barrier In Fantastic Literature"