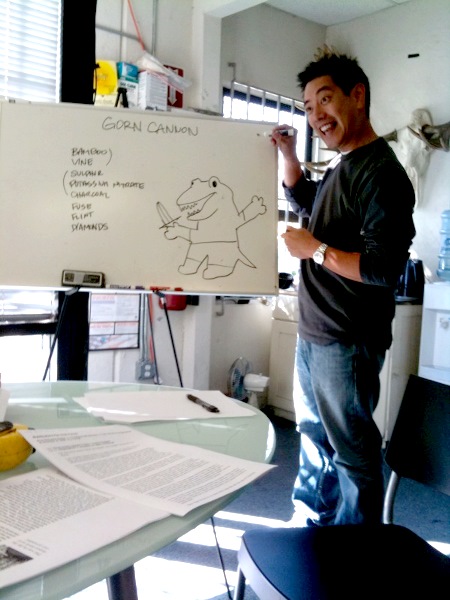 To those of you who don't already know: Grant Imahara and the gang at Mythbusters will put the theory of the Gorn cannon from Star Trek TOS to the test on next season's Viewer's Special episode. Mr. Imahara's July 8th tweet announcing the event:

"YesssssKirk!!! It's official. #Gorncannon is a go for next season's Viewer's Special. Thanks to all fans 4 your help! :)"

Grant appears to be very excited. He also tweeted that he's ordered a science-blue Starfleet uniform for himself and that Buster will be wearing (appropriately) a red shirt. Read on for details on the original Gorn cannon -- and a serious look at the science involved.

The Gorn cannon originated in the TOS Season One episode titled "Arena" in which a race called the Metrons abduct Kirk from the Enterprise and force him to fight a Gorn opponent "to the death." Kirk finds the ingredients needed to mix up a batch of gunpowder -- plus some diamonds to use for ammunition -- and creates a cannon in an attempt to kill the Gorn. Fans of Mythbusters and Star Trek alike are dying to see this myth tested. Twitter and SciFi websites are alight with comments like Mythbusters crew to replicate Capt. Kirk's Gorn defeating cannon! Total geek out!!, That is definite TiVo-worthy material, and Must see TV for realz! I <3 Mythbusters! Users on several sites are already predicting that this myth will be busted, but they can't wait to see the larger, exploding version of the Gorn cannon the Mythbusters build team will create to achieve the desired end result.

First, to create traditional gunpowder, Kirk or the Mythbusters must mix together three compounds. A high-purity carbon compound acts as the fuel. A nitrate (nitrogen-oxygen compound) provides the oxygen to oxidize the carbon. The final ingredient, sulfur, is a genuine multitasker. It not only acts as a catalyst, speeding up the whole reaction, but it also lowers the combined mixture's critical temperature, making it easier to ignite. Once the ingredients are combined in a proper ratio and an initial heat source such as a flame is introduced, an unstoppable exothermic chain reaction is initiated. The nitrate's oxygen oxidizes the fuels, releasing thermal energy and a large volume of carbon dioxide and nitrogen gases. Long story short: gunpowder + fire = BANG!

Let's apply that knowledge to the Gorn cannon. A very desperate Kirk takes a wooden cylinder and starts adding available mineral compounds by the handful. He successfully locates potassium nitrate, sulfer, and charcoal and mixes them. Assuming he had the right quantities, this would most certainly produce gunpowder. Furthermore, if his percentage of sulfur was high enough, he would be able to successfully ignite it with the relatively weak spark from flint. Plausibility of this part of the myth? Very high.  So far so good. From here on out, though, things become a bit more iffy.

Second, contrary to my above "equation," gunpowder isn't particularly explosive. Normally it just...puffs. To actually take advantage of all the energy released, you have to contain the reaction in an enclosed space and focus it in one direction to propel a projectile. In Kirk's case, he did this by packing the gunpowder into the bamboo tube so that all the energy would be directed out the open end.

Unfortunately, bamboo's a fairly weak composite in the transverse direction. (I can't comment on the mechanical properties of space bamboo, though, so who knows.) That means there's a high chance that the explosive force would just tear through the sides of the tube. Admittedly, Kirk slightly increased the strength of the tube by tightly wrapping a fiber around the part of the tube that would experience the most stress. It's highly unlikely that this degree of reinforcement would actually be sufficient, though. If terrestrial, naturally occurring materials were actually used, the plausibility of this is quite low.

Third, for the sake of addressing the final component of the myth, we'll assume that the fiber-wrapped tube is actually strong enough to contain and direct the blast. Kirk saw diamonds as natural projectiles waiting to be used and loaded his gorn cannon up with several of them. This is probably the weakest link of the entire myth. What makes conventional projectile weapons effective is that almost all of the energy released by the explosive charge is harnessed to propel the projectile.

To pull this off, the diamond projectiles would need to either naturally fit snugly in the tube or be held in a sabot -- a device that creates a temporary seal in the tube (and a Mythbusters favorite). Considering the way Kirk casually tosses the diamonds into his impromptu weapon, I'd say we can rule out "snug fit," and he probably didn't have the materials available to build a sabot even if he wanted to. Because of this, most of the gases released by the gunpowder would simply escape past the diamonds; the diamonds might still receive enough of a kick to exit the cannon, depending on the amount of gunpowder used, but they would have nowhere near the muzzle velocity of a real cannon.

To compound their low velocity, naturally occurring diamonds like the ones seen in the episode are actually fairly smooth. Without a sharp tip, there's no way they could go through thick skin at that range. That's assuming they even hit their target, too. Since the projectiles are so much smaller than the tube's diameter, they would not fly straight. At best, you would have a "scatter gun" effect. Plausibility? Less than the plausibility of a Gorn jumping out of your morning cereal.

Overall, the episode features a basis of relatively solid science. When you get down to it, though, the specifics of the Gorn Cannon don't hold up. Busted.

Thanks, John. And we look forward to the episode!

6 Responses to "Mythbusters Test Gorn Cannon, We Bring The Science"