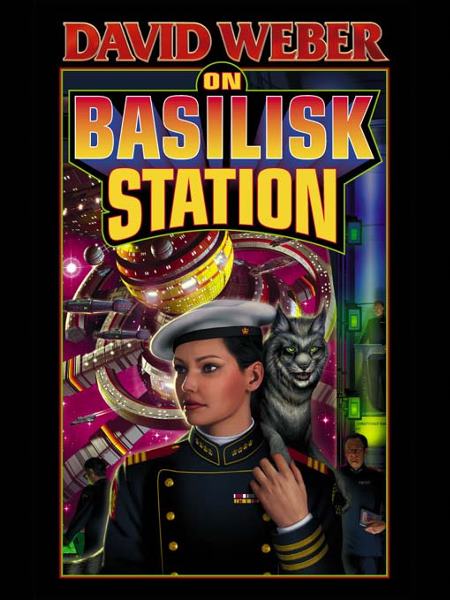 A couple of months ago when I neared the bottom of my "must read" pile, Sean mentioned on the 'cast that he really enjoyed the Honor Harrington series by David Weber. Since I'm not a "book bigot," I decided to give the first, On Basilisk Station, a try.  After waiting seven to ten days for Amazon to ship it to me I finally had it in my hands and ready to crack the cover.

In short: I loved it! Honor is strong, conscientious, and treats her enemies with respect.

Why do I love Honor Harrington, the series' brilliant female strategist and namesake? She's both mentally and physically strong. She's knowledgeable in martial arts, shooting, and swords. She can command a ship with total support and devotion from her crew because she has their total respect and she respects each and every one of them. And most importantly she has a conscience. Losing her crew hurts her horribly, but having to eliminate enemy crews hurts her almost as deeply. Because of this, she does not kill just to kill. Any enemies that survive battles with Honor's ships are picked up and treated with courtesy and respect.

Her companion Nimitz -- a loving, capable, and dangerous (to enemies) treecat complete with four legs, two arms, and an awesomely-entertaining attitude -- was a surprise, though. Author David Weber treats Nimitz as a full-blown character in the books. Nimitz has his own feelings, his own relationships, and his own opinions. He has his own quirks and addictions. While my first thoughts and mental images of him were those of a large house cat, he quickly became much more to me. His empathic ability and his link to Honor and her emotions are one of my favorite parts of the series.

I'll admit that I don't understand everything in the books. I took algebra twice in college before I passed, and the series contains a lot of math and science to explain gravities, T-waves, and acceleration and deceleration rates. Initially, the anal side of me started to read and re-read these parts in an effort to understand.  But eventually I realized that while they're part of the book, I don't have to completely understand all these concepts in order to enjoy the rest of the story. Instead of letting them stop me from reading, I just accept those concepts on faith and enjoy the Honorverse.

Having plowed through the first four books, I now own the last of the available paperbacks in the series and am working on those. The hardest part about reading this series is fighting the spouse for a book as we're both reading the same title right now. David Weber also penned four books thus far in an Honor Harrington extended universe that Sean assures me are worth the read. I already have them on my wish list!