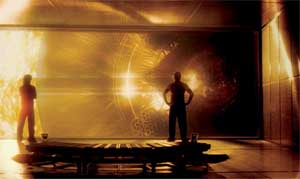 8 Foreign Genre Films Worth A Look

Hollywood may turn out most of the big screen's sci-fi/fantasy/horror films, but it isn't exactly an exclusive relationship.  In fact, many of the most unique (and occasionally offbeat) of these genre's films come out of other nations' studio systems.  Unfortunately, due to the relationships between theater chains and major studios, a large percentage of these worthwhile flicks never reach your average cinerama.

With many of the summer blockbusters already behind us, the the long and dreary winter months are looming closer, taunting us with their lack of major releases.  Why not dust off the ol' Netflix account and add these eight worthwhile flicks from the farthest corners of the planet.  (Some are from the nearer corners, too.) Remember 28 Days Later?  It was a surprise success worldwide, despite its usually-looked-down-on subject matter of zombies.  What you might not know is that director Danny Boyle followed this horror offering with a solid foray into hard sci-fi.  Sunshine follows the crew of Icarus II, a massive ship journeying to the sun to carry out some stellar CPR.

The ship's sole purpose is to deliver an enormous bomb (with roughly the mass of Manhattan Island) into the sun in an effort to jump-start it.  Icarus II's voyage isn't quite as smooth as the crew would like, though, as Sunshine slowly transitions from space drama to space thriller.  A solid cast, surprisingly accurate science, great special effects, and an incredible electronica score make Sunshine more than worthy of a slot on any sci-fi fan's queue. Pay close attention to the year on this one, boys and girls.  At first glance you might think "Hey!  I remember that! Dr. Ross is the coolest doctor ever!" If you did, then you probably saw the 2002 American version starring George Clooney. While there's nothing wrong with the 2002 version, there's no substitute for the Soviet original. Solarís (both versions) deal with the strange phenomenon encountered by the crew of a scientific expedition to a distant planet aptly named "Solaris."

It's much more of a psychological drama than most films today, and not the easiest to wrap your brain around on the first viewing. Fortunately, Solaris is contextually rich enough and full of enough interesting visual details to make multiple viewings enjoyable.  A word of warning, though: Solaris boasts a 165 minute running time, and takes a bit to hit full stride.  If you're going to watch it, be sure to stick through it even if you're bored by the early scenes. Based on P. D. James' 1992 sci-fi novel and directed by famous Mexican filmmaker Alfonso Cuarón, Children of Men is a dystopian sci-fi film set in a near future world where humanity has become infertile. Faced with its own quickly-approaching extinction, mankind has all but crumbled throughout the world. Only Britain retains some semblance of normalcy and civilization, having become a police state.

The film follows former political activist Theo Faron on his reluctant quest to protect and transport the first woman to become pregnant in over 20 years. Children of Men has an incredibly distinct visual style that puts you right in the action. Seamless visual effects and long one-shot scenes (i.e. long periods without camera cuts) make this one of the most effective attempts at sci-fi cinéma vérité of all time. Watch it for the action. Watch it for the drama. Watch it for Michael Caine playing an old stoner with a love of bad jokes, industrial music, and strawberry-flavored weed.  It really doesn't matter why you watch it, just do! This is probably the film on this list that most of you are likely to have seen because it garnered quite a bit of popularity after great success on the festival circuit.  I'm including it anyway because I'm still surprised how often I run into people that have never even heard of it. Pan's Labyrinth is a dark and sincere modern day (mostly) fantasy film -- a fairytale stuck smack in the middle of a period piece.

The story revolves around a young girl and the slightly twisted fantasy world she creates to cope with (and mirror) the war-torn world around her. While the movie has its fair share of CGI, what makes Pan's Labyrinth a visual spectacle is its unparalleled work with practical creature effects. Not since Jim Henson's fantasy films of the 80s -- Labyrinth & The Dark Crystal -- has a movie taken advantage of this level of puppetry and "man in a suit" work with this much success. Considered by many to be Guillermo del Toro's best film to date, it's perfectly suited for one of those dark and eerily quiet winter evenings.

Read on to page two for the last four flicks.

12 Responses to "8 Foreign Genre Films Worth A Look"