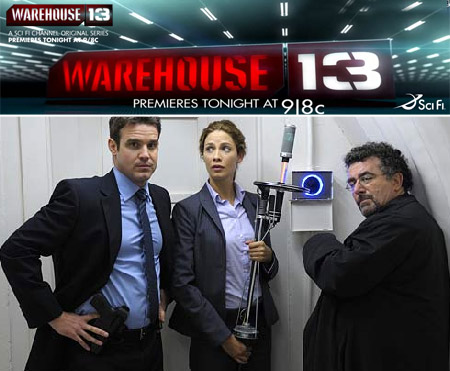 Warehouse 13 premieres tonight and I’m kind’ve stoked about it. Every time I see it I’m absolutely positive somebody had the same thought many of us had when watching Indiana Jones when we were a kid; “What the hell is in all those other crates and what do they do with them?” Now - we'll know!

Here’s SciFi’s synopsis on the subject:

After saving the life of the President, two Secret Service agents find themselves abruptly transferred to Warehouse 12 -- a massive, top-secret storage facility in windswept South Dakota that houses every strange artifact, mysterious relic, fantastical object and supernatural souvenir ever collected by the U.S. government. The Warehouse’s caretaker Artie (Saul Rubinek) charges Pete (Eddie McClintock) and Myka (Joeanne Kelly) with chasing down reports of supernatural and paranormal activity in search of new objects to cache at the Warehouse, as well as helping him to control the warehouse, itself.

I’ve been looking for a show like this for quite a while so I’m hoping they don’t disappoint but I have the feeling it will be a good time for all involved. Speaking of which, there’s a Frakparty hosted by BadgerSpoon on the forum if you’d like to watch through it with like minded viewers or just check out what they thought in case you happened to miss it.