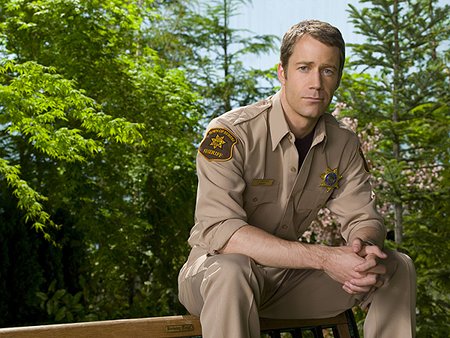 Why You Should Watch Eureka

So your DVR is empty. You've probably re-watched a DVD of a favorite show and have added an extra movie to your Netflix subscription to fill the void, right? Why on Earth wouldn't you want to catch fresh new content in the form of one of the funniest and new shows out there?

On a random Tuesday night in 2007 a show called Eureka premiered on Scifi to an audience of 4.1 million. Following the classic, "fish out of water" archetype the show features Colin Ferguson as the everyman Sheriff Carter, a normal beer-and-cereal-for-breakfast kind of guy surrounded by frakkin' geniuses. He finds himself in a town called Eureka, which is home to the best and brightest scientists in the world who are given free reign to do what they do best: create mind-bending inventions, reinvent the wheel, and try not to alter the timeline, blow stuff up, bring the world to an end, or other such nuisances.

The show is at its best when it doesn't take itself too seriously and has something so many shows lack: heart. Ignore anyone who says that this is "sci-fi light" or "fluff." This is character driven dramatic comedy. And it's exactly opposite in tone from Battlestar Galactica. It's bright. It's cheery. And there's always hope -- even during the occasional invasion of nanites.

Season 3.x (or 4, or call it what you will as "Season 3" featured only eight episodes) of Eureka premieres on Sci-Fi July 10th, 2009, but don't let the fact that it's in its third season stop you from checking it out for fear of not knowing what's going on. You already know the basics -- Sheriff carter, Eureka, frakkin' geniuses -- but if you want to catch up or refresh your memory, all of season one is available on Hulu until the new season premieres. (Season two, sadly, remains offline for now.)

9 Responses to "Why You Should Watch Eureka"