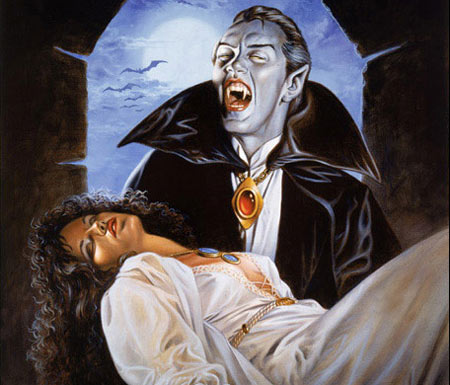 Vampires: Beyond I Vant Tu Suck Your Blaud

I think Vampires and Vampire stories suffer from a bit of an image problem. Yeah I know, that sounds funny, but it’s true. I often hear people say Vampires are disgusting or that the stories are limited in their scope because all vamp tales are the same. In my most humble of opinions these are folks who must not have much imagination. There’s tons of badass stuff out there if you care to look, so I wanted to post up a quick slam course in Vampire and why they're cool. Don’t worry, this won’t be too painful.

So the whole thing started with this dude named Vlad the Impaler. Vlad here was the prince of what is now Romania back in the mid 1400’s and he had a bit of a border problem - as in, the Ottomans and Germans were constantly trying to expand their borders and lessen his. So Vlad started some of the most effective psychological warfare in recorded history - he impaled captured solders on spikes in areas he was about to do battle. In short, it worked. Enemies were so messed up by the tactic morale went through the floor and some opposing commanders reportedly turned away from him. It worked so well he did it a lot more and it became a kind of trademark for him and his reign.

After his death, there was a certain “Elvis effect” going on. His people saw him everywhere. Possibly to try and keep out armies that thought there was nothing stopping them anymore and the idea of a terrible wraith you can’t kill is pretty damn scary. Scholars still debate how he died, what happened right after and whether Vlad was a quality human being or not. To me, that isn’t really important to the story. What is important is that Vlad and his legend helped inspire a guy to write a bit of fiction about 400 years after his death. In 1897 a dude named Bram Stoker wrote a book called Dracula that used some of the myth and legend associated with Vlad the Impaler, grouped it with Vlad’s fathers sir name of Dracul and formed them into what can only be called a masterpiece. It’s here that the first roots of Vampire lore get cemented into the modern culture; vampires drink blood, the fascination with wooden stakes, bats, bottomless lust and the whole undead thing. The bookish types love to go into the Christian symbolism here but I’m gonna blow right past that for two reasons: One, I don’t care and Two, we don’t have that much time and I can already feel this getting long. :D

1931 rolled around and there was an interest for vampirism (after the silent movie Nosferatu) in the movie industry so Universal released Dracula. The film propelled the already well known Hungarian accented Bela Lugosi to a mainline horror film actor. He did so well in the role as the famous, fang-bearing count there were very few people who could see him as anything else. In fact, his face, accent and mannerisms became a large part of what a vampire is supposed to be for close to 50 years after. Bela had managed to make such a deep mark on the role that many people today, if forced to call up in their minds what a vampire should look like, will describe Bela’s version without hesitation.

Then…a funny thing happened - the sub-culture that supported the vampire mythos started to become more established and crave more stories. It started to generate its own content. Not just a rehash of the old but new and different material that stood on its own merit. In a saga almost as old as some of the celebrated immortals in it, the rules started to change.

Writers and creators learned that much like the Matrix, some rules can be bent, others, broken. With this knowledge an explosion of content ensued.

21 Responses to "Vampires: Beyond I Vant Tu Suck Your Blaud"