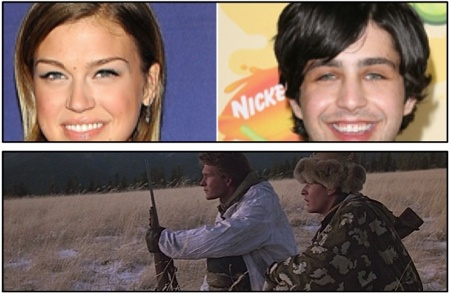 The folks over at Slice of SciFi are reporting some casting news on a purported reboot of the 1984 movie Red Dawn. For those of you not, erm, old enough to remember the flick, here's a quick summary: Russians invade the US of A, dropping paratroopers right next to a small-town high school. A few football jocks escape to fight back, even after the invading forces pull gun registration records (and, of course, the guns themselves) leaving lots of unarmed, unhappy sheep-hicks. They meet a mean fighter (Jennifer Grey -- no, really). They lose. The country eventually wins and their efforts are immortalized in a small plaque on a rock.

As crappy as this might sound, I actually enjoyed this movie when it released. As Sean likes to say, there while the overall sucked a bit, the actual moments were pretty funny. The piss-in-the-radiator bit, for example, is classic. And while some might call the movie an NRA wet dream, it struck me as more of a rah-rah-go-get-'em flick, with which I'm down.

So casting news? Slice of SciFi says Josh Peck will fill Charlie Sheen's original role of Matt while Adrianne Palicki will step into Grey's size-nines. No word yet, apparently, on who'll inhabit Jed, originally played quite effectively by Patrick Swayze.