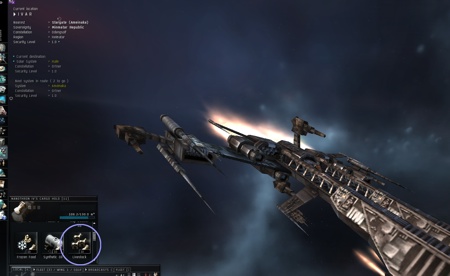 Eve Geek: The Week In Photos

As a total Eve n00b, I find the game incredibly photogenic -- so much so that I often switch to windowed mode and grab my tourist camera (read: screen shot) and snap away. I thought I'd share a couple:

Eve offers a variety of missions to help newcomers to Eve get their feet wet, and the cargo one picks up during such missions can be pretty funny, ranging from "one unit of damsel in distress" to (as you see above) livestock. Of course, whenever I end up carrying livestock, I think of Shindig. In many ways the Eve universe does closely resemble that of Firefly, as players often find themselves running from station to station (to asteroid belt to annoying agent at a beacon in the middle of nowhere) hauling freight, transporting "one unit of passenger," or eliminating various baddies (or goodies) for cash -- known as ISK in the game. And Eve is just as dangerous as the Firefly 'verse: with no dedicated PvP areas, you're exposed to the possibility of attack always.

2. The Upper Wingy Bit Is Broken

Those of you who've succumbed to my pleas and checked out the awesome machinema work Clear Skies will recognize this bit of mission deadspace fodder as a wrecked Tempest -- the ship captained by the good-hearted John Roarke. Sadly, like Roarke's ship, it's seen better days. (BTW, if you do head over to watch Clear Skies, be sure to watch Clear Skies 2 as well. In the second installment you really get the chance to see how much the guys who poured years of their lives into learning the arts of level building, acting, directing, and video editing picked up along the way.) This was taken during a level one mission Audra was running. Juan and I were tagging along to help. The junk you see in the above photo is the wreck of an NPC (known as a "rat" in Eve) battleship. I snapped this photo because we were proud to have taken down such a large ship with only our tiny (and cheap to lose) frigates. Why do I say cheap to lose? As we're trying to learn some basic PvP skills, Juan, Sean, and I have taken to "ratting" in low-sec systems. It's a dangerous task as any system with a security lower than 0.4 (on a rating of 0.0 to 1.0, with 1.0 being the most secure) there's little help from the in-game "police" known as CONCORD. So after jumping from asteroid belt to asteroid belt taking out not-so-smart computer-driven enemies, we'll often end up in combat with a much smarter actual player. Most of the time we lose, but we're learning. If you look closely you can see Sean's Tristan and Juan's Rifter (under the purple "in your fleet" icons) and my un-icon'd Rifter. 4. Even Pirates Have A Sense Of Humor

Sometimes the best learning experience in Eve is simply watching. By clicking "show info" on another character in the game you can see how long they've been playing and other in-game info as well as a "biography" should the player choose to write one. Here's one of my favorites to date. Note that Ms. Astrid is, well, unfriendly should you run into her -- the -9.9 security status representing just about as low as one can go in terms of showing the Eve world that you're ready for a fight. Hop into a system where she can find you and you're likely to meet the business end of a blaster. But her bio is priceless.

Incidentally, I find it completely refreshing to run into people who understand that just because they're pirating (read: blowing away other players for fun and profit) they don't have to be rude about it. In fact, it makes me want to become a pirate. Yarr.

5. Where It All began

According to legend, humans arrived in Eve via the Eve Gate -- a device that allowed transport of huge ships full of colonists across vast tracts of space. But an incident destroyed the gate, leaving humans to fend for themselves in the systems now a part of the game. Truthfully I know less than I'd like about Eve's history, but the fact that it has a history makes the game a lot more fun. And in that spirit I decided to make my own pilgrimage through low-sec space to New Eden, the "first" solar system in Eve. The picture above is my shuttle sitting in front of the remnants of the Eve gate.

There you have it: the last week in five pictures. If you're thinking about trying Eve, be sure to drop by the Eve thread on the GWC Forum. A few GWCers are already giving it a go, and you can find some great tips (and friendly faces) to help you through your first few weeks of play.

One Response to "Eve Geek: The Week In Photos"