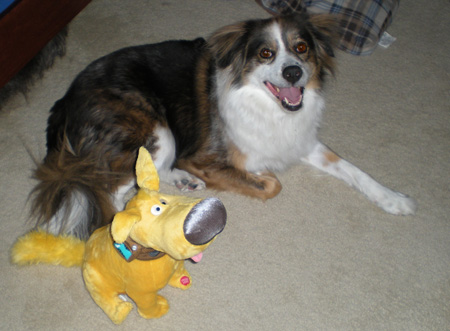 I know what you’re thinking: You’re thinking, “Did he just use Dug as an excuse to put a picture of his dog on the blog?” Yes. Yes I did. I saw Disney/Pixar’s UP today and still couldn’t get enough of Dug the dog. Hence the plushed out Dug sitting with my bestest friend Talat.

I can’t overstate the awesomeness of Dug and his high-tech translator collar that lets him speak human but there was also a beautiful story about life, love and what’s important while you’re living it, in the film as well. Pixar seems to weave these statements into many of the movies they’ve undertaken.

While Ratatouille will always be my favorite Pixar flick because it sums up in a 4 minute speech (Anton Ego’s review, which I can recite word for word at the drop of a hat) what I hold to be a universal truth about being an artist, Pixar has managed to make yet another heartfelt statement in this movie.

Life is always an unexpected adventure.

I have always wished people I care about the unexpected. As my brother’s best man I held up a glass and told the very true story of a very young Sean, years ago, that when our mother informed me of a new sibling on the way and asked if I wanted a brother or sister, I asked if it could be a puppy. Mom patted my head and said, “We’ll see what we can do.” I thought the matter had been settled. Imagine my shock when mom brought home a screaming infant instead of my new puppy!

Of course, life had something else in store for me. A few decades later at his wedding I grudgingly admitted that my brother was indeed better than a puppy and wished him and my new sister a happy and unexpected life of their own.

The first word people usually associate with adventure is excitement. However, what many forget is that there are many types of excitement. We search so hard for that overwhelming short thrill that large, really important adventures often escape our field of vision. Should our lives always go the way we plan or expect, a richness and indefinable quality is lost to us.

UP reminds us of two undeniable facts.

1. If you’re alive, you’re on an unexpected adventure whether you can see it at the time or not.

2. There are very few adventures that cannot be greatly improved with the addition of a good dog by your side.

Up The Movie [Disney/Pixar]

5 Responses to "Unexpected Adventure and Dogs"