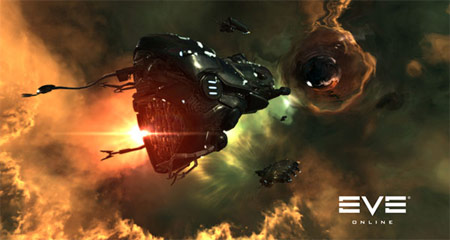 The Truth About Eve

I’m a huge fan of MMORPG’s (Massive Multiplayer Online Role Playing Game) and have been for years. A few years ago I saw an ad for Eve Online and decided to see what it’s all about - and I’ve been playing on and off for a few years now. Eve isn’t just a flight game or a techno shooter or even an MMORPG, it’s a mirror of life with the restrictions removed and set 20,000 years in the future.

In early March of this year, somewhere between planning for the meet-up and the afterglow that followed it, CCP released their latest expansion to the Eve online universe called Apocrypha. As it often happens, when either Chuck or I get stoked about something we’ll get the other into it as well. I’m not sure how it happens but it does. So when Apocrypha launched we both rejoined the space-faring masses once again with renewed interest.

I won’t tell you about all the vast changes that have come to pass in the game since I first logged onto the Red Moon Rising release in 2003 to the current iteration because many folks have already done that and there are so many changes I doubt one person could hope to keep track of them anyway.

I could tell you about the mind bending graphics that can be just as good as feature films (or better) should you have the right video card. However, you could simply look at the sweetass videos on the site for that.

No, the most interesting thing about Eve is that many don’t understand the true depth of the universe. Because of that, Eve seems to get it a bad rap from the standard online gaming community. Here are some of the typical Eve myths that make the rounds on the interwebs.

Myth 1 – All MMO's are time vampires, this can’t be any different.

While this is true of most MMO’s the Eve experience is unique in that it’s both more intense and more laid back at the same time. You won’t find yourself becoming a hermit and rejecting the outside world in favor of logging on. One of the more ingenious things about the game is that it’s setup so that you can train up and better a character even when you’re not online. Thus you don’t always have to be logged on to be doing something productive like a D&D leveling based gaming model. There are no defined levels.

I find that particular statement almost ludicrous. True enough, the action is certainly different but Eve is one of the few games that can actually make me sweat when in the heat of battle or give me the nervous butterflies in my stomach like I used to get before a big game in junior high.

There are battles that take place in Eve that can involve more people in one place at one time than other games have on their entire server – they’re called fleet battles, and they are wicked - a far cry from boring to be sure.

If you’re just starting out this can feel true sometimes, it’s really just that the universe is so large that you may find it takes a little time to get settled in and find folks you want to hang with. There are close to 300,000 active Eve accounts and they are all playing in the same server. Normally 25k – 50k folks are logged on at one time and they all have things they like doing and places to go. If you don’t get out and meet them they won’t know you’re there.

Myth 4 – Eve is so confusing. You can’t figure it out.

This is one of my favorites. The problem is really not one of flawed design its one of depth and scale. Walk with me on this: imagine for a minute that you stroll into the library of congress cold - without ever having been to a library before. You look around for a few weeks and come back out to tell people that even after trying really hard to know all there is to know in the library, you still haven’t learned it all yet. This is not unlike the criticism Eve receives.

There are aren’t 5, 10 or even 50 tracks and career paths a character can be on, it is only limited to the imagination of the person playing. The entire universe is player run and operated. The stores, the items, the space stations even entire sectors can be run, destroyed or prosper at the hands of players.

The reason you can’t find a manual to walk you through it all is simply because there isn’t one - there are as many ways to play as there are people playing it. No two players are alike so you can come at the game from any direction you’d like. There is not one manual, there are hundreds, written not by one company or developer but by dozens of authors about different parts of the world each with its own view and position.

It’s this very freedom that allows players to alter the universe of Eve by the hour. The game changes from day to day because the players do. They plan, they scheme, they murder and they even use in game business to affect the lives of others.

There is no more perfect example of two different players than Chuck and I. Chuck likes to plan things out and prepare a well thought out strategy backed up by plenty of data and research. I could care less about that. The more I plan the more it feels like work. So I adopt a “make a guess, take a stab then figure it out after you’re dead” philosophy. It may sound funny but in an online game structure either method works out just fine. Both of us get the job done and have a good time no matter how we come at it.

What I’m trying to say is: this gaming system is vast. Vast beyond manuals and strategy guides, past any other game you’ve ever played. That’s not to say you can’t just log on and have fun, that’s the whole point. Enter at any point or level you wish. Play to that level and seek amusement wherever you might find it, be it piracy or defender of the empires.

The difference, the real difference between Eve and any other game you’ve ever played is that there is always more. No matter what you’ve done or what you plan to do, no matter how much you think you know, there is still more.

In the end, some people stare into the unending abyss and see confusion or lack of purpose. Others, like the players of Eve, see something to be molded in their own image; crafted like an enchanted blade or tamed like the volcanic fire of a Dragon. It is these people that see Eve for what it truly is - us.

We control it. We bend it to our will. We break it against the hulls of our ships. We are Eve.

5 Responses to "The Truth About Eve"