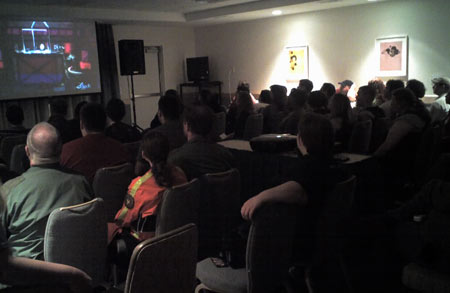 The Meetup – From A Sean’s Eye View

I hate my smile. It always looks to me like I should be onstage with my brothers Simon and Theodore - singing at double speed. So I normally scowl, it accomplishes several things, people leave you alone and no chipmunk-cheeks. How I feel about my appearance didn’t stop me from grinning like an idiot the entire weekend of the meetup though. Why? Because for the first time in as long as I can remember I was in crowded rooms I felt completely comfortable in.

I didn’t notice it at first but about three quarters of the way through the final BSG episode my wife Shannon (Mrs. Sean) leans over to me and says, “You’re so relaxed considering the crowd you're in. I figured you’d be a wreck by now.” It was then I knew that for the very first time I was in a room packed completely full of good friends and family. Sounds sappy I know but it’s totally true. I stood up and went to the side of the room where I was sitting and took a picture right at the moment so I could remember it. The whole rest of the weekend I kept looking around trying to burn the scene and faces permanently into my brain.

Everyone lived the meetup from a slightly different angle but I thought I would tell you what it looked like from my perspective. And the best way I can think to do that is not to spew play by plays but to tell you about the people that made it special for me. I will almost certainly leave a few folks out but understand that if I do it’s not a slight on anybody just the simple lack of information my head can hold at one time.

So in no particular order here are a few things I found to be true...

Bkitty and The Hub – These two are a matched set. Where ever they are is brighter for having them there. Bkitty’s smile can literally light a room up. I’m of the opinion that anyone still in a bad mood after talking to Barb isn’t a human. As you might imagine The Hub - after years of prolonged Bkitty exposure - is also a jolly addition to the mix and the aura of happiness that surrounds the pair is visible at a distance of twenty feet.

Topgun – Exudes quiet calm. Every time I (or anyone else) turned around you could find Topgun helping someone out. Whether it was helping us load and setup gear or giving rides to those who might need it, Topgun was right there all weekend with an easy smile.

Lady D – Could often be found somewhere near the Bkitty aura of happy. Thus she was always friendly and would engage anyone who came close in cheerful banter.

Rachel  – Rachel and I didn’t talk a great deal but she always wore a smile and at the after/after party Sat. night at Chuck’s place she and Lady D would burst out in spontaneous song. It’s difficult for even a professional scowler like me not to laugh along at such merriment.

Beef – For those who have never met him Beef has a deep voice that can cut across a loud crowded room. Luckily he also has a laugh that does the same thing. I share many interests with Beef and we spent a bunch of time talking about techno music and anime the entire weekend. We also learned Beefs Kung Fu is strong when it comes to crane games at Dave and Buster’s.

Xero1 –  Was both super friendly and a welcome companion for me this weekend during the meetup. He also endeared himself to my other half almost instantly after it was discovered they work in the same industry.

DawnAZ/EZ – Dawn is one of those rare people that are beautiful on both the in and outside. She had a smile and hug for everyone and managed - in true GWC style – to make everyone she met feel at ease and welcome at once.

Stroogie/GlimFeather – The Stroogman doesn’t say a whole lot at first but he was just as cool as his activity in the forum led us to believe he might be. I never saw the grin leave his face the entire weekend.

David the Canadian – David made our meetup an international one and if all Canadians could be judged by David’s standard, I’d say that we’re a lucky bunch indeed to be neighbored by such nice people.

David – David from Salt Lake - as I came to remember him -  was a member of the David “contingent.” If you didn’t know someone’s name just call them David, you had a good shot of being right. He was also of good humor about it and could often be found laughing with the other David’s in the “David Corner” of the after/after party.

French Toast – I recognize a kindred spirit in French Toast in that large groups of new people have the potential to make us a little nervous – however to the GWC folks credit, it seemed we both to settled right into the crowd and enjoyed ourselves. She seemed a very sharp lady.

Wavilyem – Em is the sweetest person you’re likely to meet. Even a glance will tell you she has a gentle soul and silent grace that make the world about her a nicer place to be in. I didn’t talk a great deal with her however the moments she did manage to silently edge up to me were filled with warm conversation and sincerity.

Steve –  Ah Steve, my homie. Steve and I camped out at the Trivia game at D&B’s Sat. night with Konrad. After missing several questions about Germany and German leaders Steve shouted out, “Zee Germans!” with white Russian in hand (The Dude style) in answer to the next few questions. I laughed so hard I nearly fell off my stool several times. It was one of my favorite moments of the weekend.

Nika – Ok, I’ll admit that I’m not sure how to spell her name and throughout the weekend I heard her called both Meeka and Neeka (spelling it the way it’s pronounced here) but I will always remember her. I will also remember that she was kind to my wife and made a point of telling me how lovely she was upon meeting me. After the weekend was nearly complete she called me “The Nice One.” I hugged her fiercely at the Sunday brunch when it was time for her to go.

Konrad – I came to appreciate Sean’s wry sense of humor. (notice he spells his name correctly BTW) He has a wit as sharp as the sword he skewered me with time and time again playing Halo 3 at the Saturday lunch. Also, after the umpteenth time he stuck me with a plasma grenade I silently started calling him “Sticky.”  You had to listen for his comebacks and jokes because they are quick and quiet but he is quite possibly the funniest guy I’ve ever met in person.

Furpey – Is just as I had imagined her, a bright, shiny, ball of creative energy. She is also one hell of a natural artist. I feel honored that she deemed us worthy enough to spend her time and talent on the new meetup logo. Whenever I saw her I screamed “Yay, it’s Furpey!!” ...of course not wanting to freak her out I didn't do it aloud. Seeing another artist just makes me happy.

Raemani –  As many of you may already know Raemani is much like gravity, fun is just drawn to her. Spend an hour with Raemani and I don’t believe it’s possible to have a bad time. She has a knack for making everyone in earshot feel special.

Smarx – Led the rousing games of Werewolves Sat night. She is as organized as she is entertaining. She also had an uncanny talent of taking a bunch of boozed up GWCers and focusing us just enough to have fun and play a game at the same time. I bow to your worthyness!

Leah W – Reminded me a bit of my Mom. Both she and my mom are patient and have never met a stranger. I find it difficult not to smile when around either one of them.

And last but in no way least is FrakkinTalos – Talos brings a fun time with him wherever he goes. He unpacks it when he arrives and lets the rest of us join in with him. He is as enclusive as anyone I’ve met and enchances any get together with his charm. In short he is a fun hearted dude, we are lucky to count him as a friend.

Like I said, I’m sure I forgot some folks but each of us lived the meetup from our own perspective and this was just a tiny bit of what’s rolling around in my head. I don’t express myself well most of the time however in this case I can say, much love to you all and a hardy thank you to all of you who made me and Shannon feel at home in a crowd full of folks we had just met.