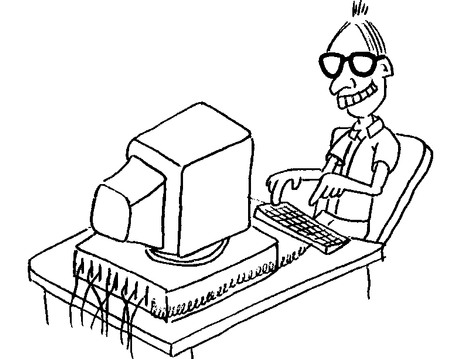 SciFi Changes Reputation Through Homonym Use

According to TVWeek.com and Twitter, the SciFi network is finally ridding itself of its geeky image by changing its name to the slick new "SyFy," which will attract the desirable demographics of hot women and people who hate science fiction.

After years of suffering the stigma of "geeks and dysfunctional, antisocial boys in their basements with video games," SyFy's savvy new marketing scheme will move the network away from hokey aliens, outer space, and futuristic worlds to better programs like Extreme Championship Wrestling, reality shows, and cutting-edge tv movies.

When the 18-to-34 techno-savvy crowd agreed unanimously that "SyFy" was how you'd text someone if you wanted to say "Sci-Fi," the president of the network, Dave Howe, said "It made us feel much cooler, much more cutting-edge, much more hip, which was kind of bang-on what we wanted to achieve communication-wise." One network source, who refused to be identified discussing such an exciting matter, said "The SciFi network has always hated science fiction. Science, fiction, yuck. Now we can finally show our fans what we're really made of."

Experts believe the new name will launch the SciFi network, which holds a long-established reputation for having its finger on the pulse of its consumer community, into a new arena of loyal fandom. Proof: when asked whether "Syfy" sounded cooler and less alieny and spacey than "SciFi," 9 out of 10 people on the street told us to f#@% off.

11 Responses to "SciFi Changes Reputation Through Homonym Use"