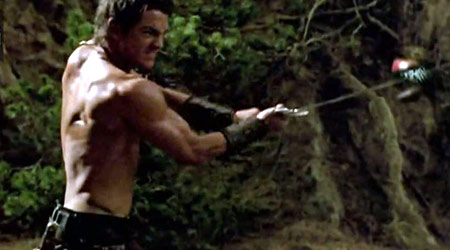 Legend Of The Seeker

Generally we don’t cover a ton of fantasy on the cast but I’m a huge fan of anything with magic, swords or dragons in it. Legend of the Seeker has all three. As well as hot, Florentine fighting guardians, wise-cracking wizards and a sword that’s thousands of years old. My favorite character is the afore mentioned wizard named Zeddicus Zu'l Zorander (Zed) who many years ago played the rather kooky chopper pilot Jedediah the Pilot from Mad Max Beyond Thunderdome. At first I wasn’t sure how he’d pull this type of role off but as it turns out he does a bang up job.

If you’re not a fan of the show let me give you some general info that might help you engage. First off, the style is very much like Xena or Hercules. It’s the same location and crew. The graphics/effects are better and the casting as I mentioned works out great. It’s a total fantasy type story. You know, a young lad learns about life, falls in love with a girl he can’t have and wields a magic sword in the name of justice and truth. The thing is, it works. Always has. Swords and magic don’t do it for you eh? How about a Mord Sith? As I understand it they're always on the lookout for a solid date and are willing to bring you back to their place. Of course there are a few down sides like excruciating pain, the torment of your friends and life in a dungeon - but on the whole it may be worth it... that outfit is killer.

3 Responses to "Legend Of The Seeker"