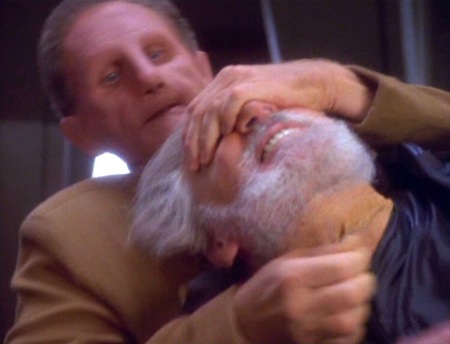 Recently I've been watching Star Trek: Deep Space Nine again from the beginning. Every time I do this, I'm struck by the moral evolution of the character Odo over the course of the series. In the fourth episode of Season One, "A Man Alone," Odo becomes the prime suspect in the murder of a Bajoran hero named Ibudan. Despite the xenophobic pitchfork- wielding mob threatening him outside his office, Odo pursues the case fairly and ultimately pulls the old-man mask off the real Ibudan, who had actually killed a clone version of himself he'd developed in shady lab experiments.

Three lessons can be learned from Odo in this episode; first, do what you know is right to the best of your ability despite suffering character attacks by bigots. Second, Sherlock Holmes' logic always worked for the opium-smoking sleuth, always worked for Lt. Cmdr. Data, and will always work for Odo, too. Third: make DARN sure the guy whose face you're yanking off really is wearing a mask. For Odo this works out, but for someone like me (or you), it never would. (Think Walter dumping the Big Lebowski out of his wheelchair.)

Having watched all of DS9 a number of times, I'm always torn over whether or not Odo is my favorite character. Early DS9 is Odo at his best: he is a noble man concerned with basically one thing: justice. But as the show progresses, it becomes clear that maybe the reason Odo was so morally solid early on was that he had very few personal attachments, desires, or motivations to be otherwise. It's the evil hag She-Founder of the peach, panty-line revealing dress who is Odo's downfall. Odo finds his true roots and allows the Founder to manipulate him, "link" with him to learn all his secrets (but supposedly offer him serenity), and to nearly conquer the Alpha Quadrant if not for the insurgent skills of Rom and Quark. Yes, because of Odo's clouded judgment, the Ferengi pretty much save our part of the universe from overlord domination.

I don't think I can ever forgive what Odo does to Kira and co. when he ruins their plans to sabotage the Cardassian-controlled station and take down the mine field. He becomes an enemy collaborator whether he intends to or not. But is it fair to judge Odo this way? He does start out as a man of conscience. And eventually, he becomes one again. The complexity of his character keeps me thinking about my own life and moral decisions, as well as how I judge other people, no matter how many times I see these 15-year old episodes. I still can't decide whether Odo is an "evil crapbag" or a decent man who screwed up. Either way, I think mulling over the answer is the kind of thing that can make us better people, and maybe even more understanding of others when they screw up.