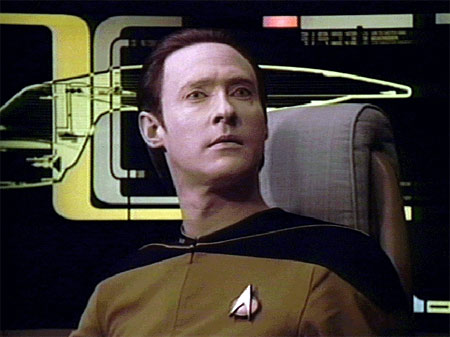 Homie, Thy Name Is Data

In an attempt to wind down a few days ago I happened to catch an episode of Star Trek TNG. It was the season 7 episode “Parallels” where Worf returns from a bat'leth tournament to find that he’s jumping through different realities. Data helps him figure out what’s up and how to fix it when everyone else on the ship thinks Worf’s been smoking syntha-crack. It was there that I began to realize something I knew all along but never quite put my finger on. Everyone needs a homie like Lt. Commander Data.

We often see him struggle with humanity, emotions and love but without fail, time and time again he demonstrates his overwhelming ability to be a solid dude.

“Hey Data, I’ve got this problem that no one else thinks exists can you help me?”

“Hey Data, we need a volunteer to go to some hell hole of a planet where angels fear to tread. Are you down?”

“Data, here’s a hypothetical time/space problem that no one in the galaxy has experienced. Can you decipher the mysteries of the universe for us before the ship ‘sploads?”

Without comprehending much about the human condition he understands the Homie-System completely. He doesn’t leave you hanging and forever has your back. This is what's called a solid dude. What does he ask in return? Very simple. Feed his cat when he’s away, check out his art, listen to his music (sometimes sporting 45 minute pauses here and there) and work on some jokes with him. That’s it. That's the price he demands for being the best friend latinum couldn't buy.

Everyone needs a Data.

16 Responses to "Homie, Thy Name Is Data"