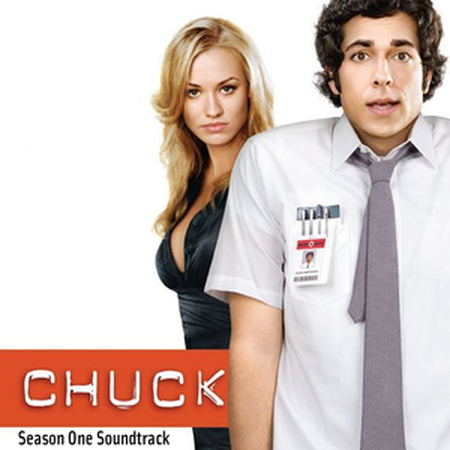 If like me you get a big kick out of the music NBC's selected to spice up the kick-ass show Chuck, you've probably looked around for a soundtrack. The bad news: there isn't one, and there isn't likely to be one any time soon. The good news: NBC (and some dedicated fans) have sussed out most of the relevant tracks.

So I took it upon myself to make my own Chuck soundtrack via Amazon's DRM-free MP3 downloads. I'm not the world's finest mix-tape maker -- in fact, I pretty much suck at it -- but I felt inspired, so I spent a bit of time selecting the tracks I thought would make a good soundtrack and organizing them for an entertaining listen.

Here's my Chuck Season One Soundtrack:

A few ID3-tagging tricks to complete the process: once you've purchased (or located in your own collection) all the tunes, you can replace the individual album art with your own (or mine above if you like it), replace the ablum name with "Chuck: Season One Soundtrack," set the track numbers to the correct order above, and (the big trick if you want it to show up right in iTunes) set the "Album Artist, "Sort Album Artist," and "Sort Artist" to wherever you keep soundtracks (I use "Various Artists"). This results in retaining the artist name for each tune, but showing the soundtrack together as an album -- and iTunes plays the album in track order.

Also, you should know that the above links are encoded with GWC's amazon associates code, so the tiny commission Amazon pays if you buy the tunes will go to help operate GWC. (Of course you're welcome to grab the tunes without the links above, or buy them anywhere you like. We'll totally live.)

Even if you're not willing to pony up for the whole album, I'd absolutely recommend checking out some of the previews. I ended up getting into a couple of the bands on the list and snagged whole albums from 'em. Great stuff, and yet another reason that Chuck (the show) rocks so hard.

7 Responses to "My Homemade Chuck Soundtrack"