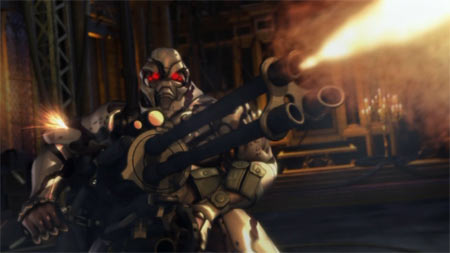 Anime can be a tough nut to crack. Tightly clung to favorites are defended to a degree that can make newcomers both confused and more than a little turned off by the level of zest fanatics of a particular series will engage newbie's with. Harsh criticism is also abundant and quick to be heaped upon anything not resembling a particular person's cadre of favorite works. Keeping that in mind I can say that Appleseed Ex Machina will change the way modern anime is done and turn traditionalists off at the same time. No joke.

Traditional Japanese cell animation is what many anime fans have come to expect in a serious film style piece. However the newest Appleseed blows right by it with some of the most stunning and inventive uses for 3D I've witnessed yet. The heavy use of Toon Shading - which is just a form of non-photorealistic rendering designed to make CGI look like hand drawings - gives the universe and characters a great deal of life they wouldn't normally have. Coupled with the superior textures and beautiful movement it's hard to fathom other producers not opting for the style in the coming years.

Shinji Aramaki who is responsible for the look of top line anime like Wolf's Rain, and Robotech and John Woo who has some of the best slow-mo and fight style in the movie business make an odd but very potent team. You can see Woo's influence in some of the "stunts" and camera angles and the very Woo signature-like bullet casings hitting the ground. And of course Aramaki is largely considered the father of modern mecha so the giant robots are nothing short of spectacularly detailed.

Ex Machina also sports a first rate story and the entire film (yes I'm calling it that) has a flavor and vibe all its own that will grab you from the word go. It takes a second or two to adjust to how much is really going down on the screen but what you see when looking at this work is the future of anime. Even if you don't like it - one day the pages of artistic history will mark it as significant.

Oh yeah I almost forgot, check it out if you get the chance.