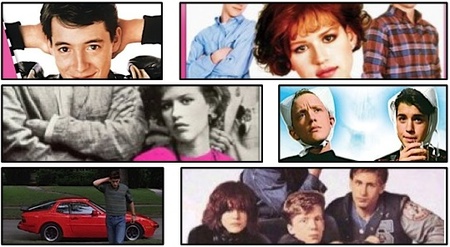 The Terminator arc is happening, and it's going quite well. Having not seen T1 in a long time, I was still prepared to enjoy the hell out of it -- even if its ancient effects would distract. (20 is like 200 in VFX years.) But it turns out that the only part that I even noticed as slightly dated was the stop-motion movement of the pure-machine Terminator at the very end of the flick. And even that wasn't bad. So here you have it: a 20+ year old sci-fi movie that still watches like one made a few years ago.

I mentioned in the last podcast my concern that there might be some, um, simpler solutions to the can't-bring-future-guns back problem involving storing said weapons in uncomfortable places. (Yes, like in the back seat of a Volkswagen.) It turns out I'm not the only one with this idea. Forum newcomer BrokenCosmos passed on some even uglier solutions developed by the machines.

Sean, Audra, and I had a killer discussion about '80s flicks just before we turned the mics on for GWC #117 -- about 20 minutes late, by the way, because the discussion was just that good. It started with Sean and I disputing which Porsche Gary drives in Weird Science. (It's a 928, just like the one in Risky Business.) This led to me bemoaning the fact that everyone says "like the one in Risky Business!" when they see my beater daily-driver 944S2. And this led us to recall that a 944 appeared in Sixteen Candles, giving me the perfect comeback: "No, like the one from Sixteen Candles." That'll stump 'em.

Anyway, you can imagine what happened next. (No, he didn't fix the plumbing.) We spent a good half-hour bumbling down every person our age's alternate memory lane: John Hughes movies. Sixteen Candles, Breakfast Club, Weird Science, Pretty In Pink, and Ferris Bueller's Day Off come immediately to mind, but don't forget National Lampoon's Vacation and Christmas Vacation, Uncle Buck, and even Mr. Mom. Cusack's early work falls in there, too, specifically Better Off Dead and One Crazy Summer.

It's at times like these that I sometimes wish GWC wasn't solely sci-fi/fantasy/comic-based. Wouldn't an '80s flick arc be awesome? How 'bout a Kevin Smith arc? But there's a problem: while the hardcore GWCers here and on the forum would most definitely stick around, would the thousands of others that listen but don't participate otherwise? Or would such an expansion of focus draw even more listeners?

That's a question that we have yet to answer. My initial thoughts: we podcast best when we podcast what we love. Maybe that should be our guide.