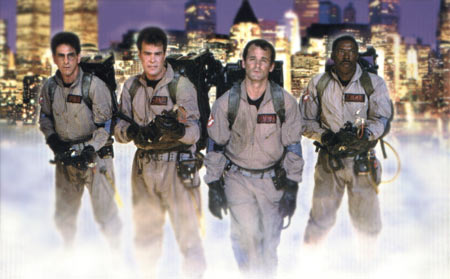 I’m Excited About This Plan

I was leafing through the latest gossip and rags at lunch and came across some good news – Harold Ramis is working on Ghost Busters 3. It’s hard to believe that after close to twenty years since we’ve seen the last installment that we would get another chance to visit the very odd and supernatural world of the Ghost Buster’s New York but it seems Ramis is trying to put the project together.

There exists a special fondness in my heart for Dr. Peter Venkman and the rest of his merry band of nether-world crusaders. To paraphrase Joe Fox from You’ve Got Mail - Ghost Busters is the I Ching, the sum of all wisdom. For example, we observe that backing geeks into a financial corner is a recipe for creative thinking and might lead to the first paranormal containment agency. We learn when someone asks you if you’re a god the correct answer is – YES. Of course we also learn the most important lesson of all – if the customer doesn’t pay then simply put the ghost back in the room.

I will also admit that Bill Murray’s portrayal of the smart-assed Venkman and the way he delivered his cracks in a quick, unassuming manner still follows me to this day. It’s also the archetype for how I react to the world in my everyday existence – which incidentally is met with about the same level of tolerance he receives in the series.

Laugh at the hokey songs and catch phrases all you want. They are a bit on the corny side even then much less now. However, the truth is if you’ve never wanted to slide down a fire pole into a tricked out, 1959 Cadillac Hearse right before you scream around town with sirens blearing - you just wouldn’t understand where I’m coming from.

4 Responses to "I’m Excited About This Plan"