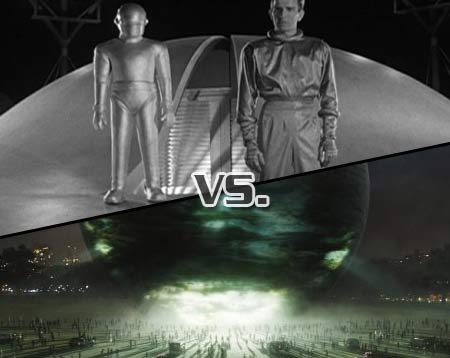 Give The Earth a Chance

It's often difficult to be a Science Fiction fan. We must endure much. The disdain of our fellow man for our geekness and the outright fury of our own geekly kind for holding contrary views to their contrary views - oh yes it is quite a complicated existence. As rabid fans of all things sci-fi we tend to become instant critic and often executioner to any questionable media set in our path. I'll admit to doing it myself a time or two. However being a true sci-fi geek means you must try to hold yourself to a different standard - or perhaps a more tolerant one.

I spied a movie poster for a remake of The Day The Earth Stood Still recently which happens to be one of my favorite classic sci-fi flicks of all time. I was immediately excited to see the idea getting some play again because let's face it, Gort is frakken cool. My joy was sort lived. No sooner had I called my gaggle of geeks over to converse about this latest hotness than they started much whining and pot-shotting about how crappy it was going to be.

Respected members of the media also caved to the allure of negativity about the upcoming release. I value the right of sci-fi enthusiasts to blow raspberries at the finest of flicks in protest but I felt certain judging it after having seen ninety seconds of the film four months in advance is a trifle premature. They are of course entitled to their learned opinions but I must shake my head in shame at the collective reactions of my geeky brethren.

I agree that the 1950's version of this movie is a timeless classic that everyone should witness. Its stern warning of bleak futures and what we might aspire to should we answer the call to greatness was imprinted into my brain at an early age. The six year old version of me, a very young (very annoying) blond-headed boy who walked about with limbs frozen, answered only to Gort and repeated the words "Klaatu barada nikto" in response to every question anyone asked him loved this movie. Nothing has changed that love for it since then.

Oh yes, I feel the very real danger of Klaatu and Gort falling into the same level of despair that Tom Cruise brought to War of The Worlds. I know Keanu Reeves and Jaden Smith will most definitely give the movie a different vibe than the Michael Rennie and Billy Gray did fifty years ago. There will be more action scenes and most likely some of the suspense created by black and white mood lighting will be replaced by special effects.

However, the one thing that upsets me more than any of that could ever hope to is the knowledge that many young people couldn't tell me who Gort is if I stuck a gun to their head and denied them access to google. The message is lost in time - and that's a fate worse than anything modern Hollywood could do to it.

I find I don't always share the vehement contempt for remakes that many pros and geeks alike have voiced so eloquently. Remakes can often be good things that add to the depth and understanding of the viewer as well as being works of art onto themselves such as the re-imagined Battlestar Galactica or Batman to name a few recent ones.

Just because a story was told before doesn't make it the final and only possible word on the subject. Humans tell stories - it's what we do and how we learn. It's been this way for thousands of years. Countless stories have been told, changed, retold and changed again with each generation making their stab at telling their vision of it. Undeniably, some retellings are superior to others and it's not always better the next time around.

Somewhere along the way the sci-fi geek arose to stand amongst the bleating herd and crave something different and new. Though no two geeks will agree on which 'Trek is best or how light speed might actually be achieved there is one constant that remains true - we can see past what is real and imagine what could be. This is the beating heart of sci-fi and what we must remember to channel when a new piece of media is presented to us.

There is an excellent scene in the Pixar movie Ratatouille where the longtime cynic Anton Ego explains the nature of being a critic.

In many ways, the work of a critic is easy. We risk very little yet enjoy a position over those who offer up their work and their selves to our judgment. We thrive on negative criticism, which is fun to write and to read. But the bitter truth we critics must face, is that in the grand scheme of things, the average piece of junk is more meaningful than our criticism designating it so.

To sum that up, the view is good from the cheap seats.

Simply being a naysayer and habitually blasting any piece of creative work takes little effort or thought. Value and enjoyment can be found in many works both great and shameful and it begins with our own imagination and openness to the ideas and concepts put forward. Still, sometimes after careful viewing loathing is indeed warranted but reserving that wrath until after you've seen the film is to be recommended.

13 Responses to "Give The Earth a Chance"