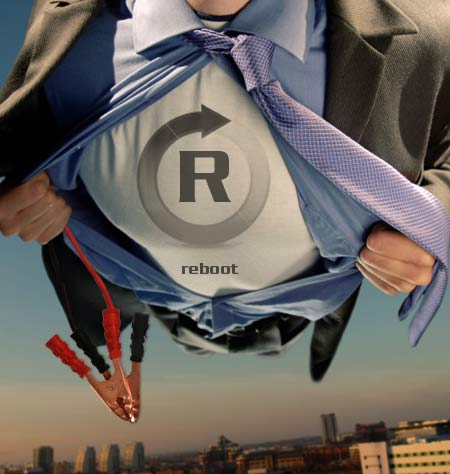 I'm a prequel hater. No, not those prequels or even prequels in general, but rather the fact that for years "prequel" has been the buzzword that's grabbed hold of seemingly every major franchise in existence and twisted it to ask "what came before?"

Sometimes it's great to know what came before. But sometimes I just really want to see what's going to happen next instead of an introspective look back. When I heard the new Star Trek flick would be a "prequel," I almost cried. (Yes, grown men can cry. Especially when the only Star Trek they're going to get in years is going to be a goddamn "prequel.") "Can no one think of any way at all to move the Star Trek universe forward?" I thought. "Has the Star Trek universe (technobabble) expanded to the point where it's experiencing entropic 'heat death,' contracting back in on its past self on the way to total annihilation?"

"Ah, reboot!" I think. "Awesome." Then today I saw this piece by SyFy scribe Michael Hinman. According to Hinman, while the Superman franchise has avoided the IP challenges of Watchmen, it faces its own "bump in the road:"

The studio apparently has called the 2006 Bryan Singer version of the film a "misfire," mirroring earlier reports, and couple be looking at doing a reboot similar to what Marvel did with "The Incredible Hulk," according to Dark Horizons.

A "misfire?" Sure, it wasn't an incredible movie. But doesn't it occur to these highly-paid and experienced folk that mabye it's not their take on Superman's story that's the problem but rather Superman himself? Even comic n00bs can point to the real problem: Superman is freakin' omnipotent save for the (relatively lame) Kryptonite. This limits Superman plot selection -- regardless how talented an auteur you snag to do the choosing -- to bad guys show up, bad guys get their asses kicked by Superman, bad guys pull Kryptonite, Superman almost dies, Superman escapes Kryptonite and kicks bad guys' asses. Wash, rinse, repeat.

You could "reboot" Superman so that he's a drunk, womanizing, man-whore with a penchant for young nookie and not giving a damn. But that won't work because then he's not Superman.

Wait, what am I saying? Maybe the studio should slam Superman back in the hands of Kevin Smith -- or better yet Seth Rogen. Just think: A weed-updated Superman III with Christopher Mintz-Plasse as Superman. Rogen himself as the post-toking Man of Steel. The comely Emma Stone could play his ubiquitous moll.

And on a related note, holy crap! Does Stone look just like a young Jodie Foster -- say in this flick made the year Stone was born (!) -- or what?

Accept it. Work around it.

BTW, if by some reason you haven't already heard about it let me be the first to tell you: SciFi canned Atlantis this week to make way for the franchise's next series: Stargate Universe. I'll admit that this woke me up to a few facts:

At least Atlantis isn't disappearing forever; it'll follow SG-1 down the direct-to-DVD path, which is suspect will keep both producers' pockets full and viewers' need for 'Gate sated for years to come. Direct-to-DVD solves many of the problems that plague successful "cult" faves -- shows that draw a small but dedicated fan base. DVD flicks require less overall time commitment of actors and production staff and less air-time commitment -- and long-term cash -- from broadcasters. Considering the financial success of SG-1's DVD movies -- and soon Atlantis', too, we hope -- maybe this could catch on as the perfect exit strategy for the next Firefly.

It's too bad it's not catching on quickly enough to save BSG. Though I've remained mosty (if not entirely) spoiler-free, I do know that all of Galactica season 4.5 is in the can, which means that the story is likely locked down. It'd be a pretty big stretch to imagine Moore and crew leaving a movie-sized gap in the final countdown.