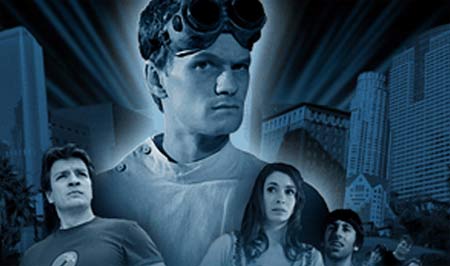 Dr. Horrible and Me

I heard a great deal about Dr. Horrible's Sing-Along Blog in the last few weeks and it came heavily recommended from people I respect so I decided to check it out. After about 10 minutes in I couldn't watch anymore, I turned it off it was - horrible. I wondered why folks had been making a fuss over it but went about my merry way.

A few days later I tried again figuring I was perhaps in a bad mood and I needed to give it a second shot. Nope, it was still bad. I moved on again.

Fast forward a few days later to earlier this week. I was whistling a tune I realized to my horror was the Bad Horse theme... uh oh. I tried to think of something else. I tried to flood my head with other music, no good. My brain had disobeyed a direct order to stop singing the song. I was powerless. I surrendered. I logged on that night and decided to let my doom overtake me.

The funny thing is the more I watched the better it got. I was totally bought in when the chorus rang out, "we do the weird stuff." I couldn't stop watching. After the third or forth time through and what must have been the 15th time around on Neil Patrick Harris singing the Shown Me the Light song I must admit to digging it. I had now despite my own hang-ups been converted to a Dr. Horrible fan.

This happens a lot for me but in truth the ones I hate at the beginning become some of my favorites down the road. It's strange but true. Anyway I would like to extend a thank you to all the GWC folks who turned me onto it. I should have known you guys wouldn't lead me astray! Bad Horse might but not you guys.

11 Responses to "Dr. Horrible and Me"