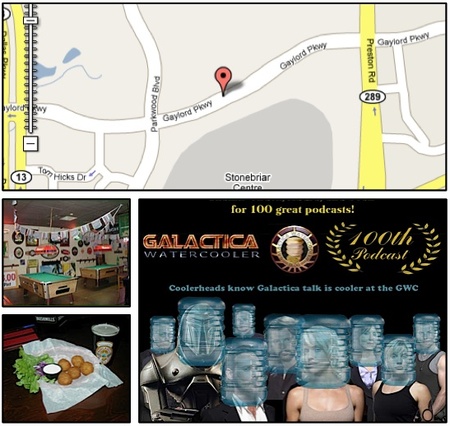 Party With The GWC Crew!

Do you remember what you were doing on September 20th, 2006? I do. I was fighting with a crappy old laptop trying to put out the first episode of Galactica Watercooler. Now almost a year and a half -- and 144 hours 22 minutes and 25 seconds sitting in front of a mic -- later, we're preparing to complete our 100th podcast.

Then we're going to celebrate by popping down to our favorite local pub, drowning some fish 'n chips with a few pints, making drunken speeches, and generally having a good time.

You are, of course, welcome to join us.

If you can't be there, well, that sucks. If you're in Germany, Australia, England, Hong Kong, or Thailand (yes, you know who you are), we understand. As soon as someone backs up to GWC with a dump-truck full of cash to buy ads to sell all of you DVDs or some other (acceptable to us) cool stuff, we'll schedule a meetup at your place. Really.

Those of you in the great northeast should know that American Airlines has last-minute fares to DFW (their central hub) available -- including airline/hotel packages for around $350. Start here, but you'll have to dig to find 'em. No, you can't crash at our place. But if you come down for the event, I'll personally buy your first drink. If you're Solai or part of the Philly Crue, I'll buy you two. And I fully expect to make it up your way sometime this year.

If you're in the DFW area -- or any other Texas metropolitan area -- head out now. There are three hotels within a stone's throw of the pub, and some cheaper ones just up the tollway. You don't want to miss this. It's gonna be great.

12 Responses to "Party With The GWC Crew!"