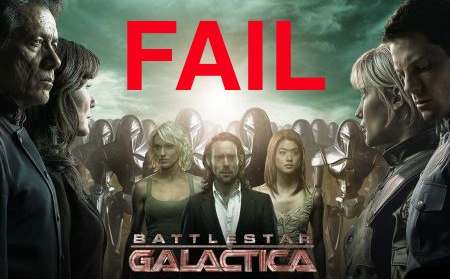 Any time a sci-fi series receives the amount of positive press that Battlestar Galactica has received since its explosive season four premiere earlier this month, it draws out the haters. And whether they're the "I don't see what's so great about it" type or the "I could've done it better" crowd, they're always around to ride the publicity wave.

Maybe he missed his coffee yesterday morning -- or maybe he discovered that his tax refund isn't going to be as large as he'd hoped -- but Jonathan Toomey over at TV Squad penned a major bit of smack yesterday titled (very creatively) "Battlestar Galactica should be called Ga-suck-tica." His take:

"I don't see what the big deal is.

"To be completely honest, I'm a little bored. For the most part, the acting is stale and rigid, it's chock full of sci-fi cliches, endless good vs. evil rotes, and I'm not really sure that I care if the humans lose to the Cylons."

Of course, he does offer this caveat:

"To be fair, I suppoose I should preface all of this by saying that I've never been a huge sci-fi fan. The genre never really 'took off' for me? Get it? That's a rocket ship pun!"

But since he has gone to all the trouble of being honest and fair, maybe we should give him a read. Here's the short list of what he has to say about the series, having seen only the first nine episodes of season one:

I'll leave you to go and check out his specific complaints, though I do have one request: please don't email or comment on TV Squad to bash this guy. There are already plenty of people taking care of that, and frankly I think it's below GWCers.

So why did I write about this? I want to remind fans to see this type of article for what it is. It's not a commentary on the show, but rather a purposeful attempt to draw fire (and page views) by pissing in the Wheaties of those who've found enjoyment from the series.

There's good news, though: Haters are a sign of success. Based on what we've seen of season four already, we'll see more haters soon.

15 Responses to "Let The Hating Begin…"