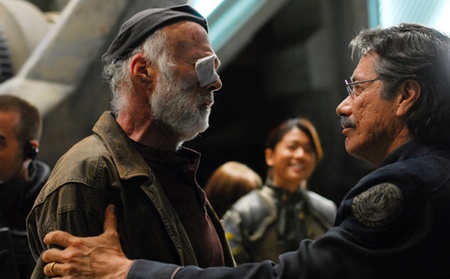 ComicMix just fired off a Q&A with BSG co-executive producer Mark Verheiden. And while thankfully Verheiden doesn't dish any spoilers, his "A"s to ComicMix's "Q"s point speculative fans in some interesting directions. For example, when asked why Six can sense the final five while Athena can't, Verheiden responded:

"It's important to look back at where we've been. Remember that Anders, Tigh, Tory, and Tyrol only realized they were Cylons when they reached the area of space seen at the end of Crossroads, Part 2."

In response to many fans' concern regarding Baltar's "harem," he reminds us that "Gaius was President of the Colonies for a while, duly elected over Roslin. There was clearly a groundswell of support for him then, and there's no reason all those supporters would have abandoned him overnight." He also notes that Lee's abrupt reconciliation with his father makes more sense when considered in light of the elder Adama's vote to acquit Baltar.

But GWCers who noted in the forum that in Tigh's vision he shot Adama in the same eye that he's missing will be happy about this response from series writer and Friend of GWC David Weddle:

"I was waiting for someone to pick up on that telling detail. Congratulations. But I am disappointed you have not figured out its significance within the larger mythology of the show. It's all laid out for you. All you have to do is run the episode over again in slow motion, and the deeper truth will be revealed."

Click here to join GWCers who I'm sure will be doing just that. I'll be in the media room with the TiVo. In the meantime, don't miss the rest of this informative interview over at ComicMix.