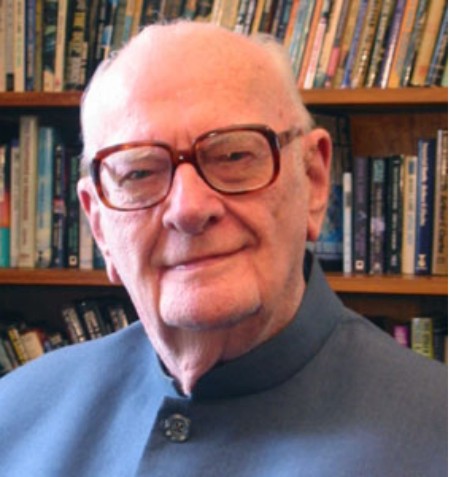 Clarke Embarks on a New Odyssey

Clarke's ideas rippled throughout science, scienceÂ fiction, and broader popular culture. His concept of the geostationary telecommunications satellite in 1945 predates the creation of modern telecom satellites. And Clarke's 1979 novel Fountains of Paradise laid the groundwork for what he believed would be his ultimate legacy -- the concept of a space elevator that will replace space shuttles.

Clarke'sÂ fiction and nonfiction books, essays, and short stories as well as his work in the arts and sciencesÂ earned him numerousÂ honors and namesake discoveries (including a species of dinosaur found in Australia, Serendipaceratops arthurcclarkei). In 1998 he was honored with a knighthood by the Queen of England.

From the biography at the Arthur C. Clarke Foundation:

During the evolution of his discovery, he worked with scientists and engineers in the USA in the development of spacecraft and launch systems, and addressed the United Nations during their deliberations on the Peaceful Uses of Outer Space...In 1954, Clarke wrote to Dr. Harry Wexler, then chief of the Scientific Services Division, U.S. Weather Bureau, about satellite applications for weather forecasting. From these communications, a new branch of meteorology was born...

Since 1956 Clarke has lived in Sri Lanka exploring a passion for marine diving, where he said he comes as close as possible to the weightless feeling of space. Having suffered post-polio syndrome and at times been confined to a wheelchair, Clarke once said, "I'm perfectly operational underwater."

At his 90th birthday party last December, Clarke expressed his wish that one day extraterrestrial beings would "call us or give us a sign...We have no way of guessing when this might happen," Clarke said; "I hope sooner rather than later."

3 Responses to "Clarke Embarks on a New Odyssey"