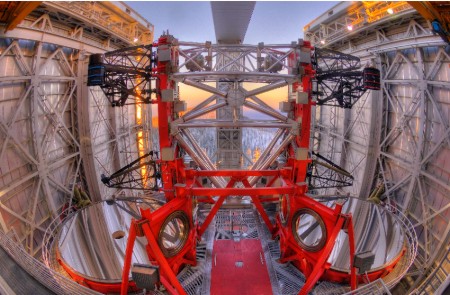 Okay, so there haven't been any confirmed sightings of a Cylon ship -- but as of this year, the Large Binocular Telescope (LBT) perched atop Mount Graham in Arizona is the closest we humans have come to being able to see clearly something that far away. At 580 metric tons (double the weight of the previous heavyweight telescope champ) and with ten times the clarity of the Hubble, the LBT can't see farther than our previous best scopes, but it can see a wider, sharper view of space -- and also whatever sexy cyborgs may be hurtling toward an inevitable invasion of Earth.

To be honest, I didn't know that scientists had quantified the "beginning of time" at 14 billion years ago. I have a pair of jeans at least that old, and something had to come before. Otherwise, who made them?

Academic and astronomy institutions in Germany, Italy, and the U.S. began with conceptual designs twenty years ago and today are undoubtedly popping champagne across the globe. Just keep an eye on the Dradus.