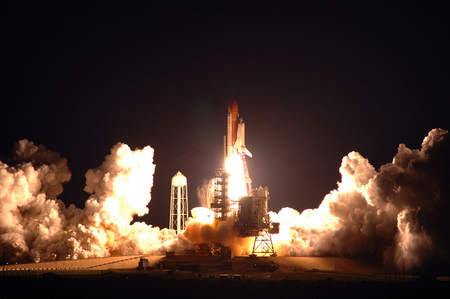 You may have missed this morning's 2:28 a.m. ET launch of the space shuttle -- unless you live in Brevard County, Florida. Besides the fact that the shuttle's three main engines and two SRB's make enough noise to be clearly heard in Orlando about fifty miles away, the launch is so bright it turns the night sky a light blue. Sadly, night launches are somewhat rare. This is the only the 30th night launch of the shuttle.

So far it appears that everything went off with out a hitch, and the orbiter Endeavour's crew is currently resting after a busy first day.

I've always felt a somewhat personal connection to Endeavour specifically, because when I was touring the Vehicle Assembly Building at Kennedy Space Center, Endeavour was sitting inside awaiting its Orbital Maneuvering System pods. (Yes, I'm dating myself. Endeavour was brand-spankin'-new back then.) I walked around it and beneath it -- my first close encounter with a still-active spacecraft.

This mission, STS-123, is expected to last seventeen days, and will deliver to the International Space Station the Japanese Kibo laboratory -- two small pressurized sections that will increase the station's research capabilities -- as well as Dextre, a "hand" for the station's robotic arm. According to NASA, Dextre (pictured below) "is capable of sensing forces and movement of objects it is manipulating" and "can automatically compensate for those forces and movements to ensure an object is moved smoothly." If you'd like to keep up with the latest on STS-123, take a look at NASA.gov's space shuttle page. And remember, an online feed of NASA TV is always available free.