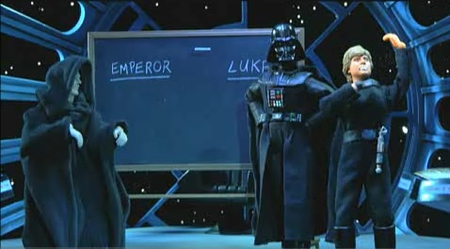 Those of you who haven't yet seen Robot Chicken's incredibly-funny Star Wars parody episode -- yes, both of you -- can now check it out, assuming you have an XBox 360 and 240 remaining Microsoft points. (That's about $3.) The folks in Redmond have added the show to their XBox Video Marketplace (XVM).

Personally, I'm still holding out for the DVD, which is still scheduled for a May 20th release. While I love the idea of renting via download, I'm still not wholly sold on the portability of downloaded media -- especially via XVM. What happens when the next gen consoles hit streets in a few years? I'm planning on re-watching Robot Chicken far past that point.

On the other hand, if I hadn't already seen it, I'd gladly shell out $3 for it -- considering it a rental of sorts. And as far as I can tell, this is the only legal way to watch it right now.

Of course, for those of you possessed more of the dark side, there's always YouTube and bittorrent.