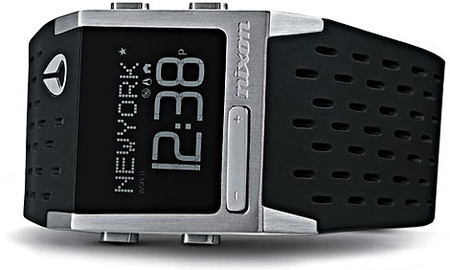 If the fact that Hiro Nakamura wears one isn't enough to make you drool for this watch like I do, there's a practical side as well: its high-res face can display the time in 37 cities -- perfect for anyone planning to blink from Tokyo to Times Square instantly. Of course, you'll have probably have to set it manually after a jaunt to feudal Japan.

Even the uninitiated will appreciate Nixon's skate and snowboard cred, and you're unlikely to run into anyone else wearing one -- unless I find a spare $150 in the near future. I know it's over-priced, but I'm a bona-fide watch fiend. This one's totally on my list.

One Response to "WANT: Nixon Connect"